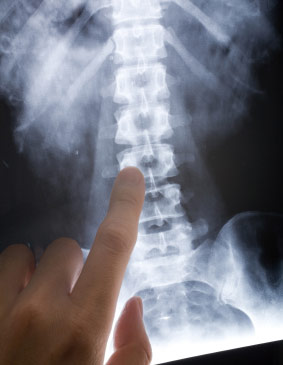 Linked risk: Ankylosing spondylitis, a form of arthritis that in severe cases can lead to fusion of vertebrae, may share a genetic basis with autism.

The genetic risk factors for autism may also increase a person’s risk of developing ankylosing spondylitis, a form of arthritis of the spine, and decrease the risk of multiple sclerosis, according to a study published 13 December in Translational Psychiatry1.

The results suggest that similar abnormalities underlie both autism and autoimmune disease.

Epidemiological studies have shown that women with rheumatoid arthritis are more likely than controls to give birth to a child with autism. Women who have children with autism are five times more likely than controls to have antibodies that attack mouse brain tissue. When these anti-brain antibodies are injected into pregnant mice, they lead to social deficits in their offspring.

In the new study, researchers investigated whether autoimmune disorders and autism have a common genetic basis. They looked at the genomes of individuals in 941 families that have more than one child with autism, 3,000 individuals with an autoimmune disorder — ankylosing spondylitis, multiple sclerosis, rheumatoid arthritis or Crohn’s disease — and 4,500 controls.

The researchers identified all the single nucleotide polymorphisms, or SNPs — alterations to single DNA base pairs — associated with each disorder. They then compared the group of SNPs associated with autism and those linked to autoimmune disease.

Autoimmune thyroid disease is also slightly associated with an increased risk of autism, the study found. However, the researchers saw no association between autism and Crohn’s disease or rheumatoid arthritis.

Like autism, ankylosing spondylitis is more common in males than it is in females, whereas multiple sclerosis is more prevalent in women, the researchers note.