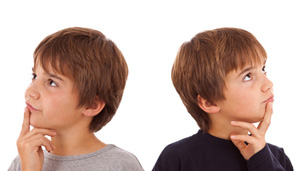 Twin troubles: Communication problems in identical and fraternal twins are linked to attention problems at age 8 and to autism at age 12.

Children with attention difficulties early on may later show signs of autism, such as trouble holding a conversation, says a new study published 14 November in Psychological Medicine1.

The study, a survey of typically developing children, is potentially important because it suggests that treating early signs of attention deficit hyperactivity disorder (ADHD) may prevent autism traits, the researchers say.

More than 70 percent of people with autism also meet the diagnostic criteria for another psychiatric or developmental disorder, and ADHD is one of the most common. A number of studies have shown that individuals with autism and those with ADHD share certain mutations.

In the new study, researchers surveyed parents of more than 5,000 pairs of identical and fraternal twins in the U.K. about traits associated with ADHD and autism. Parents used the Childhood Autism Spectrum Test (CAST) and the Conners’ Parent Rating Scale for ADHD traits first when their twins were 8, and then four years later when they were 12. The study focused on this age bracket because the brain changes as children transition from childhood into adolescence.

Using the survey data, the researchers compared the traits for autism and ADHD in each twin pair to assess their genetic and environmental similarities. If both conditions have a common genetic basis, identical twins would be expected to share more traits of the disorders than fraternal twins do.

They then analyzed data from both ages to see how traits of autism and ADHD influence one another over time.

At age 8, communication difficulties in identical and fraternal twins were often linked to attention problems, such as interrupting others or not listening when people spoke to them. Four years later, most of these children’s communication challenges were more reflective of autism than of ADHD.

The researchers also found that traits of autism can later lead to problems with attention, such as being easily distracted, although this trend is less significant.