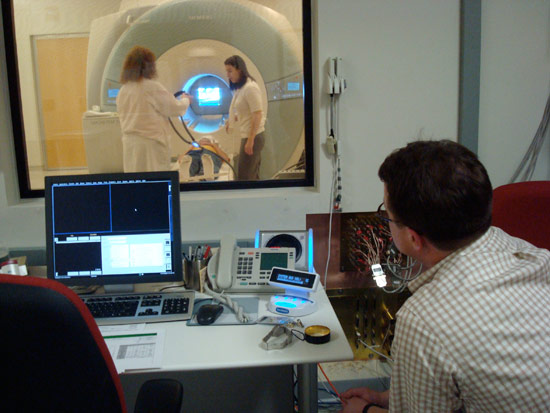 Family ties: Even when they show no symptoms of autism, healthy siblings of kids with autism share distinct patterns of brain activity with their affected siblings.

Children who have autism and their healthy siblings share patterns of brain activity that are different than those seen in children with no family history of the disorder, according to unpublished research presented Thursday at the IMFAR 2010 conference in Philadelphia.

Because the siblings do not show even mild autism-related behaviors, the brain activity represents a useful ‘endophenotype’ — a quantifiable trait that arises from carrying autism risk genes, rather than as the result of having the disorder, the researchers say.

“We were stunned that we could find something out about the brain that seems to not be observable with any of your standard clinical tools,” says lead investigator Kevin Pelphrey, associate professor of child psychiatry at the Yale Child Study Center.

Previous research has shown that, unlike typical children, those with autism are not sensitive to ‘biological motion’ — the movements of people and other animals.

In the new study, Pelphrey’s team used functional magnetic resonance imaging to compare brain activity in 25 children with autism, 20 unaffected siblings and 17 healthy controls while they watched dot animations of biological motion, such as a person walking or playing patty cake.

Compared with the other two groups, children with autism show abnormally low activity in the right posterior superior temporal sulcus (pSTS), a ridge atop the temporal lobe that is sensitive to biological motion, the study found.

Children with autism and their healthy siblings both show low activity in the fusiform gyrus and the ventrolateral prefrontal cortex, both of which are activated during face processing.

Intriguingly, healthy siblings show abnormally high activity in a back portion of the right pSTS. The researchers call this a ‘compensatory marker’ because, they suggest, the unaffected siblings use this region to counteract the abnormal circuit activity that they share with their autistic siblings.

“It’s possible that the development of these regions was one of the things that helped them to avoid having autism, despite having the genetic risk,” Pelphrey says.

Other experts take issue with this explanation, however, noting that it’s misleading to call it a ‘compensatory’ trait without understanding the underlying mechanism.

“You could say it’s a potential site for some change in function, whatever that might be, but compensatory is a very loaded term,” says Eric Courchesne, professor of neuroscience at the University of California, San Diego (UCSD). “The fact that there’s a difference is interesting — it’s just important to think about how to interpret that,” he says.

Another point of contention is that Pelphrey’s team intentionally excluded siblings with mild autism-related traits, but not those with full-blown autism. This approach could mean that the circuits the siblings have in common reflect some shared biology that has nothing to do with autism risk.

“You just don’t know,” says Lisa Eyler, assistant adjunct professor of psychiatry at UCSD. “That’s why I think it will also be important to look at siblings who have subclinical symptoms, because they might be the ones who are sharing genes important for autism.”

Pelphrey admits that what he calls a compensatory marker could be a reflection of environmental factors or different experiences during social development. He plans to do a direct comparison of healthy siblings and siblings with some mild autism traits to assess whether their brain activities differ during biological motion tasks.