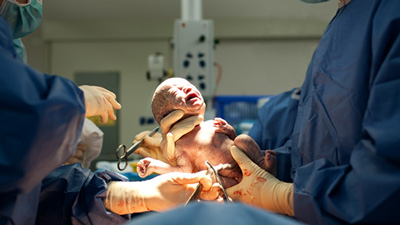 Mice born via cesarean section show subtle social deficits and increased immune and stress responses, suggesting a link between exposure to microbes at birth and behavior. Researchers presented the unpublished work today at the 2014 Society for Neuroscience annual meeting in Washington, D.C.

Many studies have shown that babies born via C-section have an increased risk of developing allergies, asthma and metabolic illnesses such as diabetes. Last month, John Cryan and his colleagues from University College Cork in Ireland published a systematic review showing that C-sections also modestly up the risk of autism. The new findings may help explain why.

Babies born vaginally are thought to receive two crucial exposures in the birth canal: microbes and extreme stress. Researchers suspect that this journey helps prime the infants’ immune systems and stress responses for the rest of their lives.

“It’s like pushing the start button,” says Yuliya Borre, a postdoctoral fellow in Cryan’s lab who presented the new work.

In the new study, Cryan’s team used a mouse version of C-sections to investigate how this might affect the mice’s brain and behavior. Because the procedure requires killing the mother mouse, the researchers gave the newborn pups to a foster mother for rearing. They then compared the pups with a control group delivered vaginally but also raised by a foster mother.

They found that compared with this control group, the C-section mice show several symptoms reminiscent of autism, including repetitive behavior, anxiety and mild social deficits.

“Very, very fascinating stuff,” says Jane Foster, associate professor of psychiatry and behavioral neurosciences at McMaster University in Ontario, who was not involved in the new research. “The design is strong, and that’s what makes it a believable finding.”

The researchers first looked at how the pups respond to being separated from their mother early in life. Mice born via C-section make longer and more frequent cries than those born vaginally, the study found. “They were more stressed, so they were calling for the mom more,” Borre says.

In another test, the researchers presented the pups with three chambers, each with bedding from a different source: their mother’s cage, an unfamiliar mother’s cage or new, neutral bedding. The control pups prefer the chamber with their mother’s bedding, but the C-section pups “just wandered around,” showing no preference for any chamber, Borre says.

The C-section mice also show abnormal behaviors in adulthood. They have repetitive behaviors, burying more marbles than normal mice do. They also seem to be depressed: When forced to swim, an activity mice generally loathe, the C-section mice give up more quickly than controls do. What’s more, 45 minutes after the test, they have higher levels of stress hormones in their blood.

Cells from the spleen of these mice produce excess levels of pro-inflammatory cytokines — signaling molecules of the immune system — such interleukin 1 beta, TNF-alpha and IL-6. Cytokines, including IL-6 in particular, have been linked to autism-like features in mouse models of autism and in people with the disorder.

The researchers don’t know why or how C-sections lead to changes in behavior. One hypothesis, the so-called ‘leaky gut’ theory, suggests that because of an altered immune system, microbes and other molecules in the gut somehow seep into the peripheral circulation and eventually reach the brain, altering behavior.

Bolstering that idea, they found that in adulthood, the intestine is more permeable in C-section mice than in controls. The gut does not appear to be leaky in adolescent mice, however. “Why that is, we don’t know,” Borre says.

Gut microbes of adolescent C-section mice show significantly less species diversity than those of controls do. By adulthood, though, that difference disappears.

“Adolescence seems to be a critical window for microbiota-brain interactions,” says Foster. “The reason why that’s good, and the reason why the design is so good, is that adolescence is our target. We want to know that we can fix things in adolescence.”

As with many studies linking the gut, immune system and brain, many parts of the story are not yet worked out. All three systems feed back on one another across development, making it difficult to tease out cause and effect. “They don’t have the mechanism — that’s what’s missing,” Foster says.