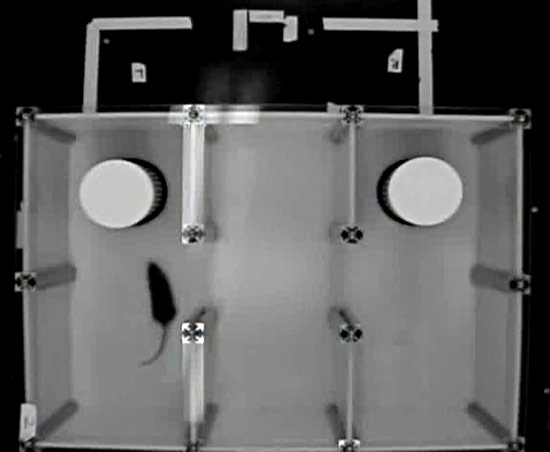 Model mice: Mice lacking the FKBP12 protein may prove to be a viable model for autism.

Mice missing FKBP12, a gene involved in a cancer pathway, show repetitive behavior and an impaired ability to socialize with other mice, and could be used to study autism, according to unpublished results presented at a poster session today at the Society for Neuroscience meeting.

FKBP12 encodes a receptor for rapamycin, a cancer drug that has shown promise as a potential therapy for autism. The FKBP12 protein is also involved in the ability of neurons to change the strength of their connections, a learning and memory process called synaptic plasticity.

Researchers at New York University eliminated FKBP12 from the brains of young mice late in their development. They then gave mice access to two chambers, one containing an inanimate object and the other containing an unfamiliar mouse. Like control mice, the FKBP12 mutants prefer to spend more time with the new mouse than with the object.

But when researchers placed a familiar and an unknown mouse in each arm of the chamber they found that, unlike controls, the mutant mice show no preference for the unfamiliar mouse.

“They are learning about the mice, and have some knowledge of the mouse they’ve interacted with before, but for whatever reason, they don’t want to explore the new mouse,” says lead investigator Eric Klann, a professor of neural science at New York University.

His team is planning to look at the grooming patterns more closely to verify that they are a consequence of the missing FKBP12.