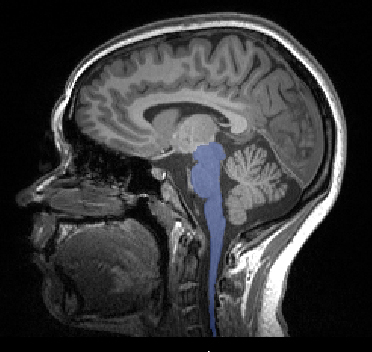 Stem study: Up to 90 percent of people with autism experience sensory problems, some of which may originate in the brain stem.

The brainstems of children with autism are smaller than average, but reach sizes similar to those of controls by age 15, according to a two-year brain imaging study published 22 April in Behavioral Brain Research1.

This is the first study to look at brainstem volume across time. It also adds to evidence that parts of the brain grow differently in people with autism than they do in controls.

About 20 percent of children with autism have macrocephaly, or enlarged heads, as toddlers. But by age 4, their head sizes are similar to those of controls.

“That speaks to the complexity of the anatomical abnormalities you see in autism,” says lead investigator Antonio Hardan, associate professor of psychiatry at Stanford University in California.

The brainstem processes sensory information, such as hearing and taste. Up to 90 percent of individuals with autism have sensory problems. The brainstem also regulates sleep, which is disrupted in many people with autism.

“The brainstem is a little bit of a new frontier, and that’s the excitement about this paper,” says Joe Piven, professor of psychiatry at the University of North Carolina-Chapel Hill, who was not involved in the study. “I think it’s an important area to look at that’s been understudied.”

A handful of studies have looked at the brainstems of people with autism, but only at a single point in time. The studies also included people of varying ethnicities, ages, genders and autism severity.

In 2009, Hardan and his colleagues published a magnetic resonance imaging study showing that children with high-functioning autism have smaller brainstems than controls do2. Intrigued, the researchers followed up on the children two years later.

In the new study, they matched 23 boys who have autism, aged 8 to 17 years, with typically developing boys of the same age range, handedness and total brain volume. The researchers confirmed the autism diagnoses with a clinical evaluation, the Autism Diagnostic Observation Schedule and the Autism Diagnostic Interview-Revised.

Over the two-year period, the brainstems of the children with autism grew by 1.9 percent and the volume of gray matter — the brain tissue that includes nerve cell bodies — grew by 3.1 percent. Neither of those changed significantly in the controls. The amount of white matter, the nerve fibers that connect different brain regions, did not significantly change in either group.

Why the gray matter increased is unclear: It may be because the children with autism have more neurons; more connections, or synapses, between neurons; less pruning of these connections; or a combination of these factors.

“We have to admit there are limitations to the brain imaging techniques that we have,” Hardan says.

The new study makes two important points about autism, says Judith Miles, professor emerita of child health, genetics and pathology at the University of Missouri, who was not involved in the study.

“It gives us a good solid foundation that says, one, it’s a change over time so it’s developmental. And two, it’s gray matter — it’s where the nerves are, where the synapses are,” Miles says. Her research has shown that the pupillary reflex to light, a measure of the autonomic nervous system, is delayed in some children with autism.

Still, the study has many caveats, say some experts. For instance, the numbers are small, the children’s ages are too wide-ranging, and the researchers scanned their brains only twice.

“It’s very hard to model it with two points that are stretched from age 8 to age 17, because there’s a lot of stuff going on there,” Piven says. “I would view this as a pilot for a preliminary study that says, ‘Hey let’s turn our attention to the brainstem.'”

Others note that the researchers do not make any associations between their findings and behavioral symptoms of the disorder.

In their 2009 study, Hardan and his colleagues found that children with autism who have more gray matter in their brainstems also have more sensitive mouths, as measured by the sensory profile questionnaire.

The new study did not add to those findings at all, notes Stewart Mostofsky, director of the Laboratory for Neurocognitive and Imaging Research at the Kennedy Krieger Institute in Baltimore, Maryland, who was not involved with the study.

“I do think that the findings are intriguing and worthy of follow up,” Mostofsky says. “But I think the implications are at this point unclear.”