The images are dazzling, but the idea behind the new color wash is more scientific than artistic. Brainbow promises to help scientists uncover how nerve cells in the brain connect with each other, which may help understand autism and other neurodevelopmental disorders1.

“People say that autism is a wiring problem, but there is essentially no evidence for that idea,” says Harvard University researcher Joshua Sanes and one of Brainbow’s creators. “I think it is probably true, but it would be tremendously important to test it and identify the precise wiring differences between autistic and non-autistic brains.”

Understanding the patterns in which neurons are interconnected is one of neuroscience’s most fundamental, but largely unanswered, questions.

“All our mental activities, our movements, perceptions, decisions and even our emotions are essentially due to the connections among the neurons in our brain and the patterns of electrical activity that run through those connections,” Sanes says. “It may not be feasible to understand how the brain works before we learn the brain’s wiring diagram.” 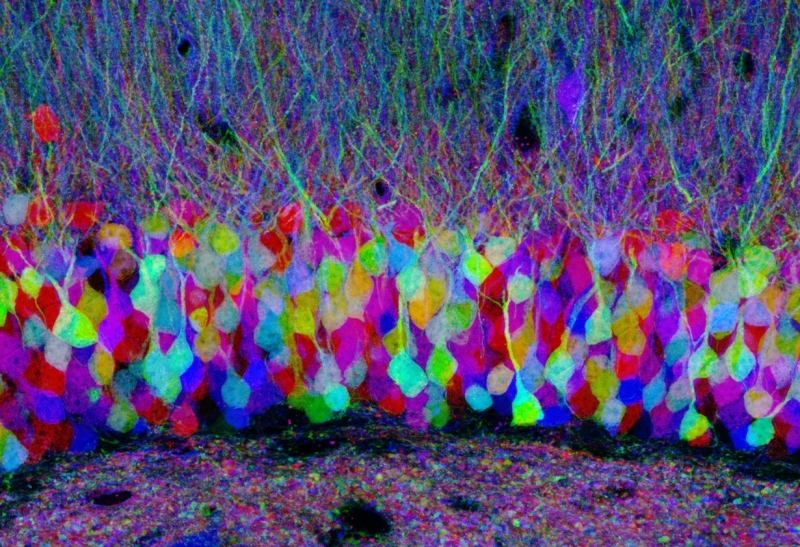 The brainbow may help untangle autism.

The complex links among different nerve cells are much like the tangled wires that link a computer with its many associated devices. Labeling each wire, or nerve cell, with a different color makes the network of connections easier to untangle, Sanes says. He and his colleagues inserted the genes for red, blue, yellow and orange proteins into mouse embryos.

At birth, each of the neurons in the mouse brain randomly selected one or more of the colored proteins to produce. Different mixtures of the four proteins created 90 distinct colors, akin to the way different combinations of red, blue and green light create all the different colors displayed on a television set.

Individual neurons are distinctly visible under a microscope, and together resemble nothing less than works of art. With funding from the Simons Foundation, Sanes is set to use Brainbow to investigate one of the main hypotheses in autism research2.

Brainbow is an enormous advance, says Gregg Stanwood, developmental neurobiologist at Vanderbilt University’s Kennedy Center for Research on Education and Human Development in Nashville. “One of the limitations of previous techniques in mapping brain architecture was that you were limited to looking at a handful of cells, sometimes just a few cells out of a billion,” Stanwood says. “Seeing this circuitry will help autism research a great deal.”