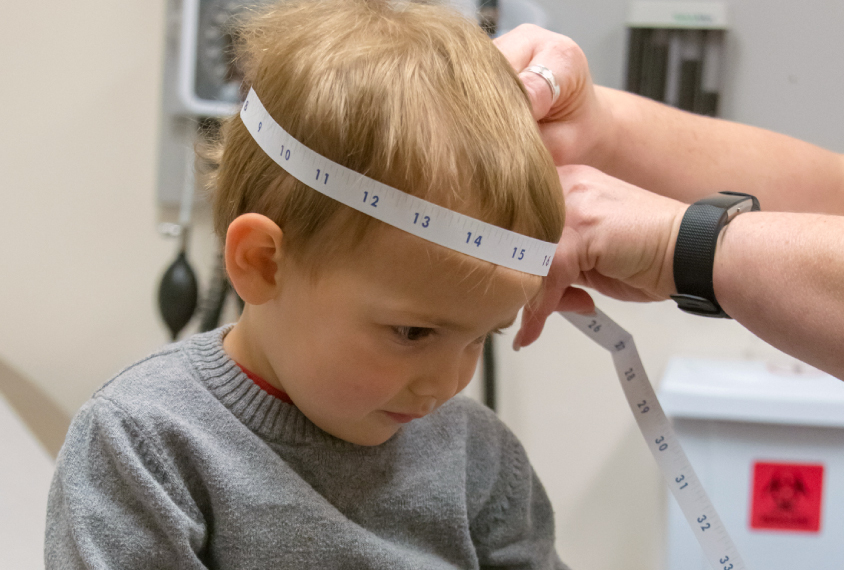 A cellular pathway that helps neurons grow and move during fetal development may drive the changes in head size in some autistic people. The findings implicate RhoA, a protein involved in brain development.

People missing one copy of a stretch of genes on chromosome 16, called 16p11.2, tend to have enlarged heads. And those with a duplication of this region tend to have diminished head size. People with either of these so-called copy number variants (CNVs) have a range of features that include intellectual disability, language delay and autism.

In a 2015 study, Lilia Iakoucheva’s team found that one gene within 16p11.2, called KCTD13, interacts with CUL3, a gene independently linked to autism. This CUL3-KCTD13 complex, in turn, keeps levels of a protein called RhoA in check early in development. RhoA is a signaling molecule that regulates a pathway involved in the migration of neurons to their correct location.

Mice lacking one copy of CUL3 show heightened levels of RhoA from fetal development up until adulthood, the team reported Tuesday. Work from another team has shown that mice lacking KCTD13 have elevated RhoA levels after birth.

Iakoucheva’s team also made brain organoids, or 3D clusters of brain cells, from skin cells of people with a 16p11.2 CNV. Organoids with a deletion of 16p11.2 show elevated levels of RhoA compared with those that have a duplication, Iakoucheva reported today.

“Now it’s almost unequivocal that the RhoA pathway is involved” in the effects of 16p11.2 copy number variants, says Iakoucheva, associate professor of psychiatry at the University of California, San Diego.

The researchers took skin cells from three individuals with a 16p11.2 deletion and enlarged heads, and from three people with a duplication and unusually small heads. They then coaxed these cells to form neurons in culture — a method that generates balls of brain cells that can serve as a model for brain development.

Organoids with the deletion have fewer neural progenitors and more mature neurons, whereas those with the duplication show the opposite trend. This discrepancy may underlie the size differences between them.

Organoids with the deletion express genes involved in the migration of neurons at lower levels than do organoids with the duplications. The differences are consistent with a deficit in the RhoA pathway, Iakoucheva says.

To further explore the effects on neuronal migration, the researchers grew the organoids on a flat surface for two days and calculated the farthest distance a neuron traveled from the organoid body. They found that this distance is shorter in both sets of organoids than in a control, but the difference is more pronounced in the deletions.

The team aims to use the organoids to screen for drugs that might normalize neuronal migration, Iakoucheva says. They also plan to look at gene expression patterns in single cells from the organoids.