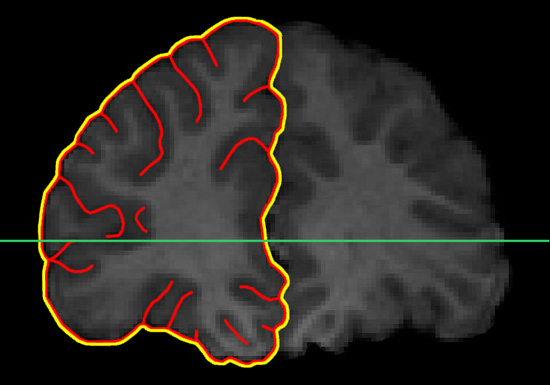 Curve ball: The level of folding in Broca’s area is higher in children with high-functioning autism than in those with Asperger syndrome or control groups.

A region of the brain that controls language is more extensively curved in children with autism than in those with Asperger syndrome, according to a study in the Journal of Child Neurology1.

The findings offer preliminary biological evidence that Asperger syndrome, a disorder on the autism spectrum, is distinct from high-functioning autism, researchers say.

Both disorders include symptoms of social difficulties and repetitive behaviors. But compared with individuals considered to have high-functioning autism, children with Asperger syndrome meet typical language milestones and tend to be articulate.

The difference between the two disorders — or the lack thereof — is a much-debated topic. For example, saying the two disorders are on a continuum, the American Psychiatric Association plans to eliminate the Asperger diagnosis and blend it into the autism spectrum in the Diagnostic and Statistical Manual of Mental Disorders V, set to be published in 2013.

“There are too many other studies suggesting that reliable biomarkers for subtypes of autism spectrum disorders are hard to find, to the point where most in the field don’t believe they currently exist,” says Robert Schultz, director of the Center for Autism Research at Children’s Hospital of Philadelphia, who was not involved with the work.

For the new study, published online in April, researchers measured what’s known as the ‘gyrification index’ — the degree to which the cortex folds, producing the brain’s characteristic contours, or gyri. The researchers based their measurements on a magnetic resonance image (MRI) of the brain region that includes Broca’s area, which controls speech production and comprehension.

Like the size and shape of a given brain region, cortical folding is a useful measure when comparing different brains. Researchers have traditionally measured gyri in postmortem brains of different animals, loosely relating greater levels of folding to higher intelligence.

The more folds an animal has, the more neurons can fit inside its skull and the more contact cells can have with one another. However, too much folding can slow down or hinder cell-to-cell communication within a brain area.

In 2008, using six different measures of folding, Schultz and his colleagues found that people with autism spectrum disorders have more folds in the frontal, temporal and parietal lobes of both hemispheres compared with healthy controls2.

Abnormalities in cortical folding have also been seen in people with other disorders, such as schizophrenia and Williams syndrome3,4.

Researchers are uncertain what causes cortical folding, but one theory is that mechanical tension in axons — the long nerve fibers that appear as white matter in MRI scans — pulls the overlying cortex into folds. That theory generates testable ideas: for instance, whether more cortical folds correlate with certain patterns of white matter in autism, says Grainne McAlonan, assistant professor of psychiatry at the University of Hong Kong.

In the new study, tracing the outer and inner contours of the brains of six children with high-functioning autism, nine with Asperger syndrome and eight healthy controls, the scientists found that the level of folding in Broca’s area is higher in the autism group compared with that of Asperger and control groups. Folding of the area is comparable in the Asperger syndrome and control groups, which researchers say is not surprising because both groups have normal verbal skills.

“I think it adds to some existing data that Asperger’s is a distinct subgroup [from high-functioning autism],” says McAlonan, who was not involved with the work.

In 2008, McAlonan’s group reported that children with autism have smaller gray matter volumes, meaning fewer cell bodies, in several regions in the back of the brain compared with children who have Asperger syndrome5.

In particular, children with the disorder appear to have a smaller corpus callosum — the bundle of nerve fibers that connects the left and right hemispheres of the brain. This finding supports the ‘connectivity theory’ of autism, which holds that people with the disorder have weak connections between far-reaching brain regions.

Last year, McAlonan’s team also showed that, compared with healthy controls, children with Asperger syndrome have less white matter in the corpus callosum in the right hemisphere, whereas children with autism have less on the left side6.

All these observations are based on small sample sizes, however, and will need to be validated in larger studies, researchers say. Experts are also divided on whether it would be useful for brain imaging studies to take these subtypes into account.

“Folding them together, in a research sense, risks obscuring results which are relevant to understanding different aspects of the spectrum,” says Andrew Stanfield, clinical lecturer in psychiatry at the University of Edinburgh.

On the other hand, too much subtyping can lead to small sample sizes and underpowered studies, notes lead investigator Antonio Hardan, associate professor of psychiatry and behavioral sciences at Stanford University.

Hardan plans to classify children with autism spectrum on the basis of history of language delay in order to continue studying children with Asperger syndrome after the diagnostic category disappears. He plans to use these categories to then investigate genes involved in cortical folding in people with the different subtypes.

“If there are any more differences [between the two groups], that’s when you say you have validity of the diagnosis,” he says.

“It’s actually quite nice to have a paper like this which shows a straightforward manual measurement technique,” she says. “One can imagine using it as a confirmatory analysis.”