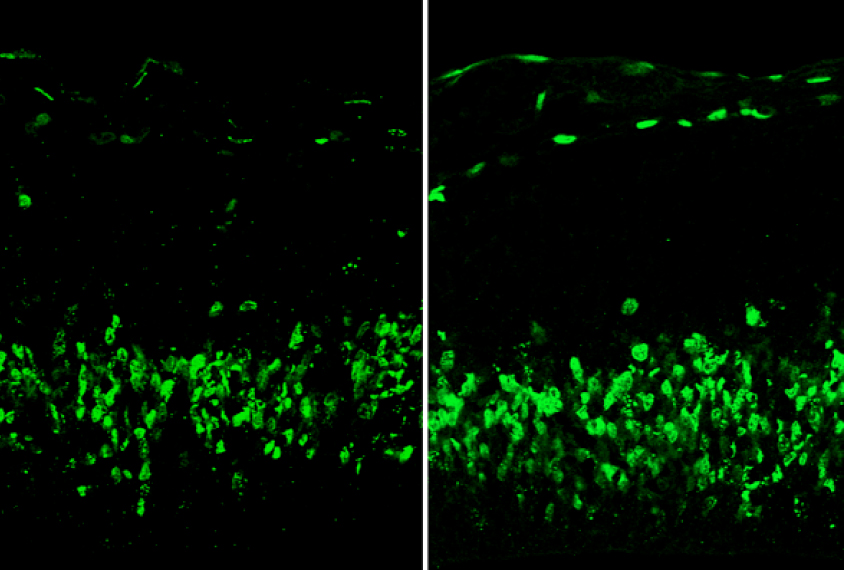 Brain inflation: Embryonic mice with a deletion in a segment of chromosome 16 produce more neurons (right) than typical mice do.

Blocking an enzyme called ERK prevents some unusual behaviors and brain structure in mice missing a segment of chromosome 16. Loss or gain of a copy of this segment, 16p11.2, is among the best-known risk factors for autism.

The results implicate a molecular pathway involving ERK and suggest that blocking the pathway could treat autism1.

Deletion or duplication of the DNA segment 16p11.2 underlies about 1 percent of autism. ERK is one of two genes in the segment known to be in the ERK/MAP kinase pathway, which is important in brain growth and development.

In 2015, the researchers reported that deletion of 16p11.2 raises ERK levels and generates an excess of neurons early in mouse development. As a result, the mice show overgrowth of some brain areas and undergrowth of others2.

In the new work, the same team found that tamping down ERK activity in mouse embryos prevents the cellular abnormalities as well as anxiety and memory problems in the mice. Treating the mice in adulthood also alleviates these behavioral problems.

“This provides direct validation to the fact that the ERK/MAPK pathway is central to the pathology seen in the 16pq11.2 mice — and, by extension, likely in humans,” says Gary Landreth, professor of anatomy and cell biology at Indiana University, who led the work.

The findings also suggest it is possible to correct much of the damage the deletion causes. Most drugs that block the ERK pathway have serious side effects, and it is unclear whether these peptides are clinically useful. But several experts say the approach is promising.

“If it holds, this would be the holy grail for being able to fix some of the negative effects of autism,” says Alea Mills, professor at Cold Spring Harbor Laboratory in New York, who was not involved in the work.

Landreth and his colleagues injected two protein fragments that block ERK into pregnant mice with a 16p11.2 deletion. They gave the mice the treatment for five days, starting at 10 days after conception. (This is a key period in brain development.) The researchers then injected the mice with a chemical that labels newborn neurons.

The treated embryos generate the same number of neuronal precursors as control embryos without the deletion. Likewise, brain imaging in adult mice treated in the womb reveals that two of the brain areas that are smaller in mutant mice are closer to the typical size than they are in untreated mice. (Embryos from placebo-treated mice generated 30 percent more neuronal precursors, replicating previous work.)

“The changes we were seeing on the molecular level were also present at the anatomical level,” says Joanna Pucilowska, senior research analyst at Providence Health & Services in Portland, Oregon. Pucilowska worked on the study as a postdoctoral researcher in Landreth’s lab.

The treatment also eases anxiety and memory problems in adult mice with a 16p11.2 deletion, but less than in mice treated as embryos. The researchers published the results in June in the Journal of Neuroscience.

The findings dovetail with work on MVP, a gene within 16p11.2 that is also in the ERK/MAPK pathway, says Mriganka Sur, professor of neuroscience at the Massachusetts Institute of Technology. Sur was not involved in the new work but led the work on MVP.

The combination of cellular, imaging and behavioral data in the study is compelling, adds Ted Abel, director of the Iowa Neuroscience Institute at the University of Iowa, who was not involved in the work.

The inhibitor’s incomplete rescue of the behavioral problems suggests that other genes within the deletion are also involved, Abel says.

What’s more, some of the cellular and behavioral differences between treated and untreated mice are subtle. Further work is needed to ensure these differences are robust, Abel says.

“To me, the work with the ERK inhibitor is an initial finding,” he says.