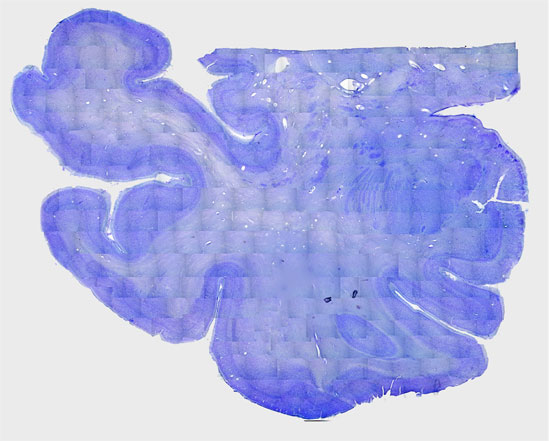 Lost pyramids: A postmortem study shows fewer pyramidal cells in the brains of people with autism.

People with autism have structural differences in the temporal cortex — a brain region involved in sound and language processing — compared with controls, according to a postmortem study presented Monday at the Society for Neuroscience annual meeting.

Researchers at the University of California, Davis, examined postmortem brains from 13 people with autism and 8 controls. The work is part of a continuing study that includes about 20 brains from each group, says study leader Veronica Martinez-Cerdeno, assistant professor of pathology. Several trends in the data have reached statistical significance with the expanded sample size, she reports.

In the temporal cortex, about 70 percent of neurons are pyramidal cells, which have an excitatory effect. The remaining 30 percent are inhibitory cells called interneurons.

In recent years, researchers have hypothesized that autism involves an imbalance of excitatory and inhibitory activity in the brain — specifically, an excess of excitation. “We were expecting that we would see more pyramidal neurons,” says Jasmin Camacho, the graduate student who presented the poster.

But the team found the opposite result: the brains of people with autism have fewer excitatory pyramidal neurons than controls do.

That’s counterintuitive, but not unprecedented. A postmortem study earlier this year found a greater density of inhibitory neurons in the hippocampus of people with autism.

The total number of neurons in the temporal cortex is also lower in people with autism compared with controls, the new study found. What’s more, individuals with the fewest neurons also had the most severe autism symptoms.

Antonio Persico, associate professor of physiology at the University Campus Bio-Medico in Rome, notes that the brains examined in the study are from people between the ages of 10 and 25.

“It would be really critical to see what happens in the age range of 2 to 10,” he says. In the older age group, loss of neurons from the cortex could reflect the effects of autism rather than the cause, he adds.