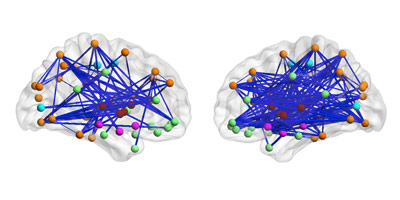 Overly connected: Many pairs of brain regions — including those involved in sensory processing, emotion and motivation — are more tightly synchronized in children with autism (right) than in controls (left).

Three studies published over the past two months have found significant evidence that children and adolescents with autism have brains that are overly connected compared with the brains of controls1,2,3. The findingscomplicate the theory that autism is fundamentally characterized by weakly connected brain regions.

Connectivity is a measure of how tightly synchronized two or more brain areas are. When two brain areas increase or decrease their activity at approximately the same time, the regions are considered to be strongly synchronized, or hyperconnected.

“I think it’s a very nice opportunity for the field, but also the general public, to become aware that network connectivity and abnormalities of network connectivity are really more complicated than just underconnectivity,” says Ralph-Axel Müller, professor of psychology at San Diego State University and lead investigator of one of the new studies. “Now we’re getting findings that are much more nuanced.”

However, results from other studies have been contradictory, pointing to increased brain connectivity among people with autism7,8. There is also disagreement about how to measure connectivity and what the term even means.

Many of the early studies assessed connectivity while the participants were completing cognitive tasks, but since then some have chosen to analyze brains in a ‘resting state’ — that is, while the participants are awake, but lying quietly in a scanner. Some studies examined short-range connections, or the links between brain networks in close physical proximity, while others focused on long-range ones. One theory suggests that distant brain areas are underconnected in autism while areas that are near each other are overly connected.

To further complicate matters, several studies last year suggested that head motion while in a scanner might interfere with brain imaging findings. When researchers corrected for this confound, they found few connectivity differences between children with autism and controls.

Two of the new studies looked at resting brains and controlled for head movement. Both found that the brains of children and teens with autism show overconnectivity.

In the first, published 14 November in Cell Reports, Müller and his colleagues used resting-state functional magnetic resonance imaging (fMRI) to assess short-range brain connectivity in 29 high-functioning children and adolescents with autism and 29 controls1.All participants were between the ages of 8 and 18, with intelligence quotients (IQs) above 70.

Overall, the researchers discovered significant overconnectivity in the brains of teens with autism. This is especially pronounced in the temporo-occipital regions of the brain, which are involved in visual processing.

They also found that the participants with the most severe symptoms of autism have the most overconnectivity in the visual regions.

This observation is particularly notable, says Mike Tyszka, associate director of the Caltech Brain Imaging Center in Pasadena, California, who was not affiliated with the study. “Linking connectivity measurements to behavior is incredibly significant.”

“I don’t think the findings for high-severity and low-severity subgroups are completely inconsistent,” Müller says. “It’s just that the distribution of the pattern is shifted.”

Previous research has shown that children with autism have an abnormally large number of neurons in the prefrontal cortex9. Underconnectivity in this region may be the brain’s way of compensating, Müller says.

Asecond study, published in the same issue of Cell Reports,turned up even moreextensive evidence of overconnectivity in young children, who are typically neglected in connectivity research2.

The researchers assembled three independent groups of children: 40 in California, 40 in Washington, D.C. and 30 in New York, all between the ages of 7 and 13. Each group had equal numbers of children with autism — all with IQs above 70 — and typically developing controls.

When the researchers scanned the resting-state brains of these children, they found widespread overconnectivity in the children with autism. This is present in both short- and long-range connections, at the level of the whole brain and within and between several smaller neural systems, including those involved in sensory processing, emotion and motivation.

“We need to conduct developmental studies to chart that out, ideally longitudinal studies,” Menon says.

Like Müller’s team, Menon and his colleagues also found that connectivity is linked to the severity of symptoms. The children who show overconnectivity in their brains are also more socially impaired, according to two standard measures of autism severity.

“This is a really important step, particularly as there are often conflicting findings across studies,” says Jon Brock, a research fellow at Macquarie University in Sydney, Australia. “It shows that the effect is robust and not just a quirk of the particular sample of children being tested.”

Still, Brock cautions that the findings may not be true of all people with autism.

One challenge in understanding how connectivity changes over the course of development is that it’s difficult to get young children to lie still in an fMRI scanner. Also, although fMRI is useful for pinpointing the exact location of brain activity,another technique, called electroencephalography (EEG) is better at capturing its precise timing — on the order of milliseconds, rather than seconds.

“We had fully expected to see an underconnectivity model,” says Jim Stieben, director of clinical and developmental neuroscience research for the Milton and Ethel Harris Research Initiative at York University in Toronto.

Overall, the three new studies don’t resolve the contradictions in the literature, but they do suggest that the relationship between connectivity and autism is a complex one.

“Taken together, they are significant papers,” Tyszka says. In particular, he says, the inclusion of young children in all three studies is helping researchers “fill in the developmental arc.”