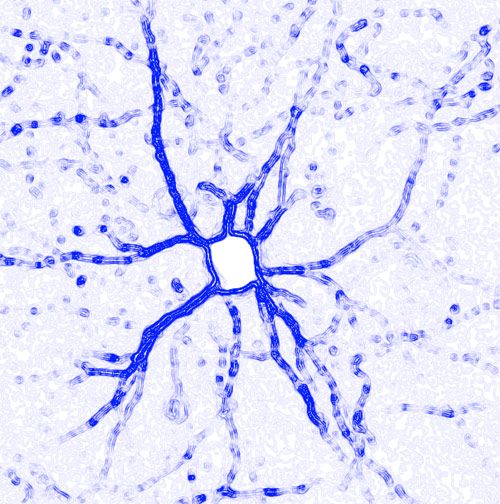 Mice lacking a functional copy of UBE3A, the gene missing or mutated in people with the rare developmental disorder Angelman syndrome, show less inhibitory activity in the brain than controls do, according to research published 7 June in Neuron1.

Angelman syndrome is caused by a deletion in the maternal 15q11-q13 chromosomal region, which contains the UBE3A gene. The paternal version of the gene is silenced in neurons.

Many people with Angelman syndrome are also diagnosed with autism, and duplications of that region of the genome raise autism risk.

The new finding could help explain why 90 percent of people with Angelman syndrome are afflicted with seizures.

Studies have found that the lack of UBE3A lowers excitatory signaling in the brain. However, seizures are thought to result from an overabundance of excitatory signals. This apparent paradox prompted researchers to suspect that UBE3A’s loss may result in an imbalance between excitatory and inhibitory signals.

“UBE3A is expressed in both excitatory and inhibitory cells, but it doesn’t necessarily have the same effect on them,” says Ben Philpot, associate professor of cell and molecular physiology at the University of North Carolina-Chapel Hill. “Our hypothesis was that if both excitatory and inhibitory cells are being reduced, you’re going to have an overall effect of a hyperexcited system, which would lead to seizures.”

UBE3A is known to be important for forming synapses, the connections between neurons, and for normal remodeling of the brain during development.

In the new study, researchers found that mice lacking maternal UBE3A have abundant inhibitory synapses. But these neurons fail to signal as effectively as controls do.

The researchers traced the defect to the cells’ impaired ability to release and reabsorb synaptic vesicles, the carefully controlled chemical bundles that ferry messages between cells.

“The dysfunction is occurring at the level of vesicle cycling,” says Philpot. “In the long term, this can cause the synapses to lose their functionality.”

Philpot’s team compared the brains of mice lacking maternal UBE3A with those of their littermates, which were otherwise genetically identical. They measured the electrical activity of neurons taken from both types of mice using a whole-cell voltage clamp.

The two sets of mice show no difference in the number or density of inhibitory interneurons, which specialize in dampening excitatory signals. However, interneuron signaling is 50 percent lower in mutant mice than in controls. Excitatory signaling is also impaired, but by 28 percent, so the overall balance of signaling still favors excitation.

Interestingly, the inhibitory defect is only noticeable in 80-day-old adult mice, but excitatory neurons show signs of defective functioning by 25 days of age.

Philpot says that it is unclear whether the decline in inhibitory activity results directly from the loss of UBE3A, or from the brain’s attempt to compensate for the excitatory decline.

His team found an abundance of strong synapses in inhibitory interneurons, but a shortage of synaptic vesicles, the crucial storage containers for neurotransmitters.

Of those vesicles that remain, an unusually high number are coated in clathrin, a protein that facilitates the transfer of neurotransmitters from one neuron to another, the researchers found.

The overabundance of clathrin points to the disruption of a specific phase of synaptic activity: endocytosis, the process by which the neuron reabsorbs the vesicles it just fired at another cell.

The faulty vesicle absorption is particularly pronounced after neurons are subjected to high-frequency stimulation using the whole-cell voltage clamp. This may mean that the inhibitory neurons in a brain lacking UBE3A are slow to recover after being exposed to a bright light or loud sound — potentially a key factor in tipping the brain into seizure.

Balance between excitatory and inhibitory signaling is crucial for enabling the brain to process information and respond to the environment2. An imbalance between these two types of signals has been described in autism-linked disorders, including fragile X syndrome and Rett syndrome, as well as other neurological conditions, such as Down syndrome and schizophrenia3.

“A lot of recent studies have focused on excitatory decline in Angelman syndrome,” says Seth Margolis, assistant professor of biological chemistry at Johns Hopkins University in Baltimore, who was not involved in the work. “This study rounds out the whole picture of what’s going on in the Angelman brain.”

However, myriad questions remain about how the signaling imbalance plays out at the molecular level.

Understanding the cell-specific effects of Angelman syndrome will require researchers to map out how UBE3A regulates other proteins in the cell. A 2010 study found that UBE3A regulates the degradation of a protein called ARC, which impairs synaptic function in excitatory cells.

“What we’re going to find will probably turn out to be incredibly complicated,” says Margolis. “But if we can tease apart the different substrates, that gives us a better shot at developing treatments for specific aspects of Angelman, like seizures.”