Analysis of movement during brain scans may skew results 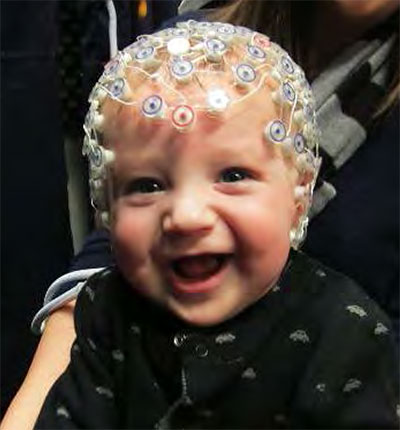 Brain readings: Electroencephalography is a method to detect the electrical impulses emitted by neurons.

Head or eye movements while wearing an electroencephalography cap, and differing methods of analyzing the resulting data, can all skew the interpretation of brain activity, according to findings presented Saturday at the 2013 Society for Neuroscience annual meeting in San Diego.

Electroencephalography (EEG) is a relatively simple and non-invasive way to measure the electrical activity emitted when neurons fire in sync. Placing an EEG cap on the head of a child with autism — particularly a child who is low-functioning — may be a lot easier than scanning his brain in a loud magnetic resonance imaging machine, say Kevin McEvoy, a graduate student in the laboratory of Shafali Jeste at the University of California, Los Angeles who presented the findings.

“If we can get consistency early, that’s better than ten years down the line saying, ‘If we’d all done everything the same way, maybe we would have had significant results,’” he says.

A number of factors can affect EEG patterns. Each time a child blinks, glances to the left or right, or moves his neck or jaw muscles, for example, it affects the EEG signal. Typically, researchers pore through the EEG data, deleting each instance of these activities.

In the new study, McEvoy sought to catalog the extent to which these movements alter EEG readings, with the hope of preserving more of the data.

He and his colleagues took EEG readings from 26 children with autism and 30 controls, ranging from 2 to 6 years of age, while they passively watched bubbles floating on a screen. This type of experiment looks at default activity while the brain is at rest, which researchers use to infer connectivity between brain regions.

Overall, there are no significant differences in how much the children with autism and controls move or blink.

However, these movements do affect the overall EEG signal, the study found. Also, each of the movements affects various types of EEG signals differently. This may partly explain inconsistent results seen in similar studies across labs, says McEvoy.

EEG signals are composed of waves, each indicating a different type of brain activity. Gamma waves, for example, are “hot,” because they are related to higher-order functions such as language, attention and memory, says McEvoy.

To account for individual differences between children, researchers often calculate relative power — for example the strength of the gamma waves relative to all the other waves. As a result, a movement that particularly affects gamma waves would skew its relative power significantly.

Some teams instead report absolute power, the reading from a given type of wave in isolation from the other types. These values can also be skewed by individual differences, but are less affected by motion than values of relative power, says McEvoy. In some instances, the results may vary enough that absolute power shows an increase in strength and relative power a decrease, he adds.

However, researchers don’t always indicate whether they used the relative power or absolute power of a wave in their analyses, says McEvoy. He recommends reporting both, and if the values are different, indicating why that might be.

The researchers are looking for consistent differences in the strength of EEG signals between children with autism and controls. They are also taking these measures before and after behavioral interventions, to see whether the readings can help predict which children would benefit from the treatments.