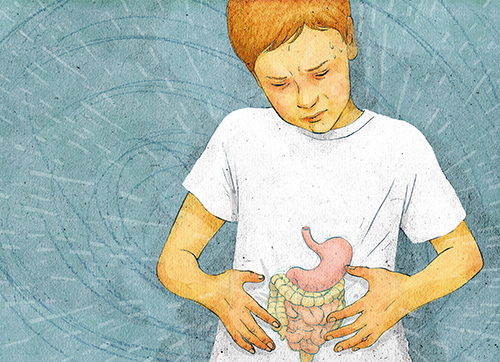 Julia Yellow Gut check: Doctors can determine whether a child has constipation by taking an abdominal X-ray.

Children with autism are about four times more likely to experience gastrointestinal (GI) distress than are their typically developing peers, reports a large review published 28 April in Pediatrics1.

The review analyzed 15 studies and found that children with autism are more likely than controls to suffer from diarrhea, constipation and abdominal pain.

“This study really solidifies the need to forge ahead with more rigorous and more comprehensive studies to evaluate the meaning of the increased prevalence of complaints,” says lead researcher Barbara McElhanon, assistant professor of pediatrics at Emory University in Atlanta.

Previous studies have suggested a high prevalence of GI problems among children with autism. The field lacked rigorous clinical research verifying the association, however, according to a much-cited 2010 report published in Pediatrics2.

That report found wide variability in how researchers collect data, including parent reports, medical chart reviews and study-specific questionnaires, and showed that only 5 of the 11 studies analyzed included a control group.

“[The findings are] not a surprise, but it’s nice to see good statistics applied to hard data that supports what people see in the clinic — that GI problems are more prevalent in kids with autism,” says Daniel Campbell, assistant professor of psychiatry at University of Southern California in Los Angeles, who was not involved in the study. “Now we need to know what exactly the GI pathologies are.”

Researchers suspect a variety of factors may account for the high prevalence of digestive problems among children with autism, including having different populations of digestive tract bacteria and patterns of gene expression compared with controls, and inadequate dietary fiber, which acts as a natural laxative.

McElhanon and her colleagues set out to confirm the increased prevalence of digestive distress in people with autism, but they found conflicting results in the literature on GI symptoms and autism3, 4.

“Some said there’s no increase in symptoms [in autism] and other studies said there is,” she says. “A lot of them weren’t really good studies.”

The team excluded studies that did not have a control group, had controls with no known GI problems or relied on children with autism who were known to have GI symptoms. They also left out research that did not provide statistical data on the differences among participants with GI symptoms.

One problem with comparing studies is that they use varying terms to describe the severity of the problems. For instance, diarrhea, the most commonly evaluated symptom, is noted in different studies as persistent diarrhea, frequent diarrhea or colitis, chronic diarrhea or just as having a history of diarrhea.

This is further complicated by the fact that about 25 percent of children with autism are nonverbal, and may have trouble communicating abdominal discomfort. “Those kids literally can’t tell you that their tummy hurts,” Campbell says.

Also, parents and doctors sometimes confuse symptoms of constipation for diarrhea, meaning the constipation goes untreated, says Jeremy Veenstra-VanderWeele, medical director of the Treatment and Research Institute for Autism Spectrum Disorders at Vanderbilt University in Nashville, Tennessee, who was not involved in the study.

In a child who is constipated, loose or liquid stools can leak around the edges of the constipated stool and stain the child’s underwear. These loose stools and stains can be mistaken as a sign of diarrhea. An abdominal X-ray can confirm whether the child has a hard stool in his or her colon, Veenstra-VanderWeele says.

Constipation and other gut problems may also affect how medication is absorbed, interfering with the treatment of other symptoms, says a new study published 1 May in The Journal of Clinical Pharmacology5. Pills for anxiety or irritability, commonly prescribed for children with autism, enter the bloodstream via the digestive tract.

Diarrhea can cause poor or incomplete absorption of medicines and constipation can cause the drug to move more slowly through the digestive system, resulting in uneven rates of absorption. One study of children with autism found that those with GI problems benefit less from risperidone, an irritability drug, than those without GI problems6. Risperidone is one of only two drugs approved for autism and is widely prescribed.