Amygdala’s links to other brain regions wane with age 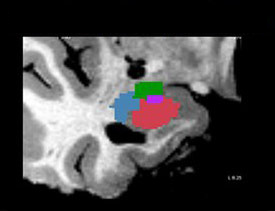 Young and old: Patterns of connectivity from the amygdala to other regions can predict age to within two years.

Young and old: Patterns of connectivity from the amygdala to other regions can predict age to within two years.

Connections between the amygdala — a deep nub involved in processing emotions — and other parts of the brain are more numerous in children than adults, according to unpublished research presented Monday at the 2011 Society for Neuroscience annual meeting in Washington, D.C.

Decades of monkey studies have suggested that the amygdala is important for social behaviors, yet its role in autism is unclear1. Looking at this new connectivity measure in children with the disorder could clear up some of the confusion, the researchers say.

Monkeys with lesions in the amygdala show an array of abnormal behaviors. Some studies have reported that the animals have repetitive behaviors and avoid eye contact and social encounters, all reminiscent of autism in people2. Other studies have found that the behaviors depend on timing: Lesions in infancy lead to social anxiety and avoidance, whereas those in adulthood can lead to more social interactions3.

“While amygdala cells are mature at birth, projections to and from other regions mature well after birth, and connections are being eliminated and refined throughout adulthood,” says Zeynep Saygin, a graduate student in John Gabrieli‘s laboratory at the Massachusetts Institute of Technology.

These individuals show no evidence of autism on multiple diagnostic tests. One possible reason for this, the researchers say, is that the amygdala’s influence on social behaviors is strongest during early development, before age 10.

But little is known about how this tiny region’s many connections change across development.

The amygdala is usually divided into four sub-regions, and each is wired differently to other areas of the brain. In June, Gabrieli’s team reported a new method, called TractSeg, for tracing the fiber projections of each sub-region to dozens of other areas.

In the new study, the researchers used this method to measure amygdala connectivity in two groups of healthy people: 28 children and 35 adults. The amygdala in both the left and right hemispheres has more connections in children than adults, the researchers found.

Based on a mathematical model derived from these data, the researchers could predict the age of participants in a second group of 25children to within two years using only scans of their amygdala connectivity.

The researchers plan to use similar methods on children with autism. “Given that we now have an expectation of when and how the amygdala is maturing,” Saygin says, “future studies can explore the maturing amygdala in developmental disorders.”