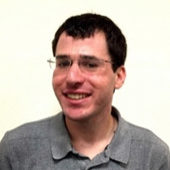 Steven Kapp
Research fellow, University of Exeter
Sign up for Spectrum’s newsletters
Thanks for subscribing!
The Expert: