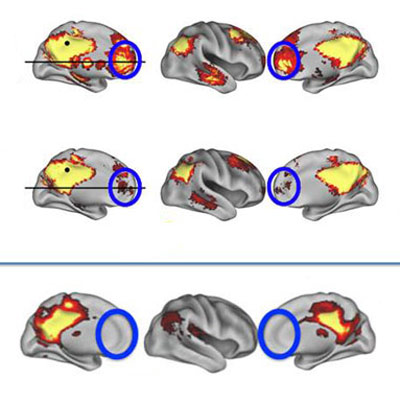 Autism often shares the national spotlight with attention deficit hyperactivity disorder (ADHD), another serious early developmental disorder. On the surface, the two seem very different: Autism is defined by breakdowns in social and communication development, whereas ADHD is characterized by a breakdown in the development of self control, which manifests as hyperactivity, impulsivity and poor control of attention.

But from there, the picture grows more complex and interesting. First, autism and ADHD occur together far more than chance would suggest. Population data are scarce, but about 30 percent of children with autism meet the criteria for ADHD1. Many children with ADHD also meet the criteria for autism as a result of social deficits, language delays and stereotyped behaviors.

Second, although both disorders are common, more prevalent in males than in females, begin early in life and range in severity, there are some differences: ADHD is more common, affecting five percent or more of the population, compared with one percent or less for autism; whereas autism has a stronger genetic bias than ADHD does, begins earlier and at its most severe is arguably more disabling.

Because of these similarities, children with ADHD may resemble those with autism, but with milder social, motor and language impairments and better — albeit still impaired — cognitive functioning.

Can this overlap provide clues to the etiology of the two disorders, such as genes that have multiple effects, common final pathways in the brain or shared triggers in early development?

Many fascinating intersections suggest that examining these disorders together may be fruitful. Here I draw upon two comprehensive reviews, published over the past two years, that provide an in-depth look at this question2,3.

In addition to some overlap in social and language problems, autism and ADHD share some comorbidities. For example, both tend to have similar incidences, between 50 and 70 percent, of oppositional defiant disorder, defined as a pattern of hostile behavior toward authority figures, and of disorders of learning and motor development.

Both disorders are highly heritable, with about 70 percent of individual variation in ADHD risk attributable to genetics, and perhaps up to 90 percent for autism. Although there is some question about the meaning of these estimates in light of our growing understanding of epigenetics4 — the regulation of gene expression without altering the underlying DNA sequence  —  a genetic influence appears to be important for both disorders.

These studies represent the earliest stages of investigation, so it is too soon to say definitively whether the two disorders share a genetic influence. However, preliminary evidence indicates that they do. A 2009 study identified 16 markers that show the strongest genome-wide signal in ADHD6. These markers are located near those identified in genome-wide studies of autism.

The researchers then reversed this logic and identified 25 additional markers associated with autism in genome-wide studies that are near regions linked to ADHD. In particular, they highlighted similarities in the 5p13, 9q33 and 16p13 chromosomal regions.

The neurological features shared between the two disorders are at least as suggestive as the genetic findings.

Autism is sometimes characterized by larger-than-typical brain size and, perhaps, by overgrowth of neurons in the first four years of life. This feature may disappear later in development and a subset of individuals may have reduced brain size, however.  In apparent contrast, ADHD is typically associated with a small cortical volume, although children with ADHD under the age of 4 years have not been assessed using brain imaging.

But on closer examination, there are some striking parallels that suggest that the two disorders may lie on a shared spectrum — at least in a significant subset of cases. For example, individuals with either disorder may have a small cerebellar vermis — a region that is involved in higher-order cognitive function — compared with controls. Dysfunction in this region may develop earlier in children with autism. Both disorders also tend to feature a small corpus callosum, which connects the right and left hemispheres of the brain.

Brain electroencephalographs and magnetic resonance imaging studies also show less functional connectivity among a set of brain regions known as the default mode network in individuals with either disorder, compared with controls. This resting-state network is active when people are not focused on a particular task or aren’t concentrating, such as when they are daydreaming or sleeping. However, the finding may be an artifact caused by head motion in scanners — an effect that is under intense investigation in several laboratories.

Groundbreaking follow-up studies at the National Institutes of Health have discovered that ADHD is associated with a general reduction in cortical thickness and a delay in cortical maturation compared with typically developing children. However, the overall sequence of developmental progression of brain regionsin the brains of children with ADHD is similar to that of typically developing children.

Autism shows alterations in cortical maturation as well, but autism brains also mature at a different rate than controls do. This may be one way to understand the pronounced neuronal overgrowth that maypersist through much of childhood and perhaps beyond in some children with autism.

Variations in cortical thickness follow a more nuanced pattern in autism, however, with some cortical regions important for social cognition being thinner and other brain regions thicker than in controls. This excess thickness in cross-sectional studies may, again, be related to changes in the rate of cortical development.

Another way to measure the maturation of the brain is to assess the integrity of its white matter — the brain tissue that transmits information. This sort of structural connectivity is measured by diffusion tensor imaging, which detects the flow of water through the brain. Because the water molecules line up with the white matter tracts, they provide clues to its integrity. This method also provides striking clues to the similarities between the two disorders.

Several studies in ADHD suggest multiple reductions in white matter integrity throughout the brain, including sections of the superior longitudinal fasciculus, a key brain tract connecting frontal and posterior brain regions7. Autism brains show the same effect, although the two disorders each appear to have other regions that may be uniquely affected.

Finally, it is important to note that questions remain about the nature of shared cognitive functioning in autism and ADHD.

Both disorders are classically associated with deficits in executive function, which includes the ability to plan actions and stay organized. These deficits are well-established in ADHD, particularly in the ability to override an immediate response in order to stay on task for a later goal (called response inhibition) and in working memory8. In autism, they are also well-established, with some question as to overlapping deficits in response inhibition.

On the other hand, consistent with some of its behavioral features, autism may be associated with unique problems in flexibly shifting from one goal to another within a task3. However, more study of the overlap in executive function deficits that directly compares the two conditions is needed.

In conclusion, both autism and ADHD are disorders of brain development with some similar and some distinct characteristics. An important research goal is to thoroughly map these characteristics. Our group is attempting to do some of this with funding from the Simons Foundation, SFARI.org’s parent organization.

The overlap between autism and ADHD, their similarities in regard to developmental alterations in the brain and their potentially shared genetics provide an important yet often neglected clue to their etiologies. It is possible that in many cases, they lie on a shared spectrum of developmental delay or alteration, with potential shared etiologies, such as risk genes or environmental factors.

Joel Nigg is professor of psychiatry and behavioral neuroscience at the Oregon Health and Science University in Portland.