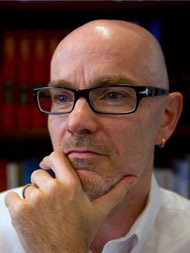 Our eyes are constantly in motion, scanning our visual world so that objects of interest can be seen, using the central part of our retinas, where acuity is highest. The majority of these movements are rapid flicks of the eyes called saccades, each of which involves the brain making a decision about where to look next.

Saccades occur several times a second (more often than your heart beats), providing a steady stream of snapshots about the perceptual and cognitive processes in our brains.

A study published in February in Autism Research uses measurements of eye movements to gain great insight into how brain processes in autism differ from those in typically developing people, with some surprising results1.

The study used a visual search task, similar to finding your car keys on a cluttered kitchen table. The participants looked for a T-shape on a computer screen scattered with L-shapes. Overall, the researchers found that people with autism are slower than controls are to complete this task.

By measuring each saccade during the search, the researchers were able to identify why: The participants with autism did not look in more places before finding the target, but rather took longer to move their eyes each time they shifted their gaze.

The study also tested how the familiarity of the context affects performance — similar to finding your keys on your own kitchen table rather than on your neighbor’s table.

When they had to search in a familiar context — a configuration they had seen earlier in the task — people with autism and controls were both able to find the target faster. Importantly, neither group recognized that some of the configurations had been shown more than once.

This suggests that people with autism are not impaired in implicit learning during a visual search. They just fixate longer on each item, and once they look near the target, take longer to report that they have found the object.

The results are surprising, at least at first glance, because several visual search studies have found that people with autism perform better than controls do at many visual tasks.

However, this apparent discrepancy may be due to differences in the nature of the signals used to guide searching. When performance is guided by local visual factors — such as identifying a target with a particular color or shape — people with autism may be faster. But when performance is guided by global visual factors — such as recognizing the overall pattern — the participants with autism may be slower.

The variety of outcomes reflects the variety of signals that help people decide when and where to move their eyes.

This also illustrates the power of using eye movements to study autism. Eye movements can be easily and precisely measured, and are related to specific sensory, motor and cognitive processes. This raises the hope that they can be used to help us understand the wide variety of symptoms in autism.

Finally, the functional circuits of neurons that control eye movements are understood perhaps better than any other system in the human brain.

As the possibility of mapping complete circuits in the brain draws increasing interest, it is important to bear in mind that the brain’s function is to control behavior.

We should aim not just for a wiring diagram but also for an understanding of how functional circuits control specific behaviors. Eye movements would be an excellent place to start, and would provide an opportunity to link discoveries across different disciplines, animal models and clinical studies.