False-belief tasks are distinct from theory of mind

Helen Tager-Flusberg
Sign up for Spectrum’s newsletters
Thanks for subscribing! 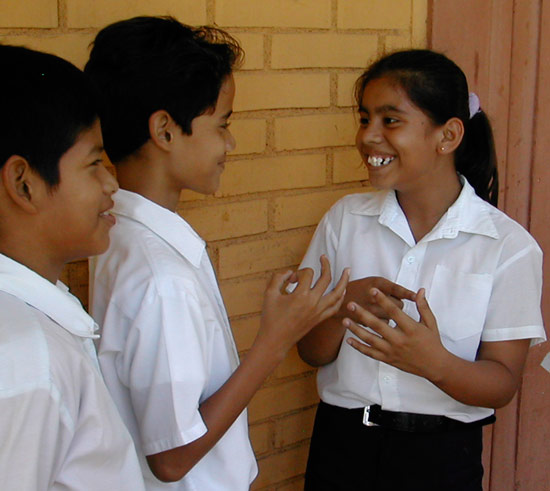 Spontaneous gestures: Nicaraguan sign language, which evolved naturally from the 1970s, is an example of how language can create mind-blindness.

The ability to understand what others think and believe — the core definition of a cognitive skill called ‘theory of mind’ — is one of the key areas of dysfunction in people with autism. Having the right language skills is also necessary to pass tasks that test for theory of mind ability. An important study takes this line of work much further, by showing that deaf adults who grew up without much exposure to language fail false-belief tasks 1.

This study, published in 2009 by Jennie Pyers and Ann Senghas, shows that language can have a causal role in the development of theory of mind.

However, it is important to distinguish false-belief tasks, which rely on language, from the full-fledged theory of mind, which is more deeply impaired in people with autism.

In the mid 1980s, researchers published a series of papers demonstrating the early development of theory of mind in typical preschoolers. Theory of mind is generally tested through a classic ‘false-belief’ task. This test provides unequivocal evidence that children understand that a person can be mistaken about something they themselves understand. For example, children watch as an item is moved after another viewer has left the room and are then asked where this viewer would look for the object. Correct responses to tasks like these show that children are able to reason about the contents of another person’s mind.

By the age of 4 or 5, most children provide the right answer on such tasks. The majority of much older children with autism spectrum disorders (ASD), however, fail these tasks, providing strong evidence for impairments in their theory of mind abilities.

Following the early seminal papers, researchers began exploring what might explain some of the variation in the age at which both typical and atypical children pass false-belief tasks. Studies show that a variety of factors, including social, such as birth order or maternal communication style; executive functions, such as not responding with the most obvious response based on the child’s own knowledge; and especially language could explain some of the variation in children’s performance on false-belief tasks.

The role of language gained considerable attention following the publication of several papers which showed that language-impaired and deaf children who are not exposed to sign languages do not pass false belief tasks until they are around 9 or 10 years old. The study by Pyers and Senghas takes this line of work even further.

Pyers and Senghas followed a unique group of deaf people living in Nicaragua who only recently created a sign language, called Nicaraguan Sign Language, or NSL. NSL first emerged in a primitive form in the 1970s, when the first school for deaf students opened in Nicaragua. Before this time, the students had no linguistic means for communicating with others. When they were placed together in a community, however, a simple sign system evolved. As the next generations of young children arrived at the school in the 1980s and 1990s, they rapidly built on this simple system. By creating forms — phonological, lexical and grammatical — for communicating far more complex messages, NSL evolved to have all the features of a full-fledged language.

Pyers and Senghas administered two sets of tasks with both the original cohort of adults who communicate with a limited form of NSL, and the later cohort of adolescents and young adults who have a more complete linguistic system. In one, they showed a series of brief videos designed to elicit a variety of mental states that the participants were then asked to describe. The other is an adaptation of the false-belief task in which the participants are shown a story sequence in pictures and asked to complete the story by choosing one of two images.

The findings are clear and striking: Only those participants who used mental state vocabulary — particularly linguistic forms for verbs such as ‘think’ and ‘know’ — were able to pass the false belief task. These participants were all in the cohort of students with the more complete linguistic system.

Two years after the initial round of data collection, the researchers returned to Nicaragua and retested most of the same participants. Interestingly, by this point many in the original cohort of adults had acquired vocabulary and other forms for communicating about mental states. They were, in turn, able to pass the false-belief tasks. The importance of this study lies in its conclusive demonstration of the causal role of language — especially language for talking about cognitive mental states — in the development of false-belief understanding.

Research suggests that many different aspects of language are important for developing theory of mind2. These include communication in social contexts, such as between mother and child or in peer interactions, knowledge of words and concepts referring to mental states, and complex grammar — especially sentence structures used to express mental states. Pyers and Senghas were not able to point to one particular aspect of language that makes the difference. It is interesting to note, however, that interacting with the younger, linguistically more sophisticated group was sufficient to enrich the vocabulary of the older cohort enough to allow them to talk about their own and other people’s thoughts and to pass false-belief tasks.

A key question remains: Before they had acquired the language of mental states, did the group of adults really fail to understand and interpret thoughts and beliefs in other people? To address this question, other kinds of studies that use implicit methods for testing false-belief understanding are needed.

One example of such a task uses eye tracking to see if children who do not pass classic false belief-tasks anticipate with their eyes where the person should look for the object. The first study to use this method found that toddlers look at the correct location while still failing to give the right verbal answer3. More recently, researchers have adapted these methods to probe implicit understanding of belief in even younger toddlers4.

One would expect that the deaf Nicaraguan adults are also able to demonstrate this level of implicit understanding, but no one has carried out this kind of study. Still, the study by Pyers and Senghas provides strong evidence that language is important for the emergence of a more explicit theory of mind, though it leaves quite open the mechanisms that drive these developmental changes at the linguistic, cognitive and neurobiological levels.

What are the implications of this line of work for our understanding of theory of mind in people with autism?

Some children and adults with ASD pass false-belief tasks, and there is strong evidence that language is a key predictor of who will pass theory of mind tests. For example, children who have mastered the complex syntax for talking about what people say or think — such as, “John said that Mary went shopping” or “Fred thought that Mary was sleeping” — are more likely to pass false-belief tasks than those who have not acquired these linguistic forms 5.

But can we really say that these children have acquired a full-fledged theory of mind?

Unlike the deaf Nicaraguans who have acquired the lexical terms for referring to mental states, even linguistically able children with ASD do not talk about cognitive mental states in themselves or others, suggesting that they do not spontaneously refer to them in everyday conversation6. We also don’t know much about their conceptual understanding of mental states. Even if they can correctly impute true or false beliefs in explicit tasks, do they view mental states as abstract representations in a person’s mind, or are they simply reasoning their way through the logical sequence of a task?

One recent study suggests that the mechanisms underlying the performance of high-functioning verbally able people with ASD on theory of mind tasks might be quite different from those used by people without ASD. People with ASD who pass standard false-belief tasks fail to show the expected anticipatory response in the implicit eye-movement task, suggesting that their conceptual understanding of theory of mind is either quite different or exceptionally fragile7.

People who grow up without exposure to a mature linguistic system have deficits that go beyond the absence of language itself: Pyers and Senghas show that the deaf Nicaruagans are impoverished in their ability to reason and infer mental states in others. This deficit surely impacts their daily life: They lack the means to predict what people are doing, gossip or follow complex narratives in movies or on television. But once they are given the words to refer to thoughts, beliefs, memories and other mental states, the social worlds of these deaf adults are quite transformed: they are able to fully engage in typical social and communicative exchanges that make up the rich tapestry of everyday life.

Not so people with ASD. Even when they have acquired the language for talking about the mind, the social world still remains a significant challenge and mystery to them. Language matters, but for people with ASD, theory of mind is more than just a problem in having the words and syntax to understand their own or other people’s minds.