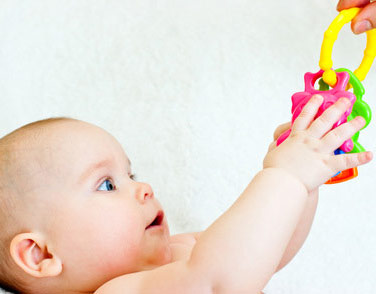 Social interactions, by definition, would seem to be fundamentally about people: eyes and facial expressions, speech and gestures, self-consciousness, projections and deception. So when I think of the science of social development, studies of face perception, eye contact, joint attention and moral dilemmas are the ones that come to mind.

But could the key to social development lie in motor development, and in an infant’s early interactions with non-social objects?

That’s the premise of a new study, published 9 September in Developmental Science. The researchers showed that reaching for and actively playing with toys can boost young infants’ interest in faces.

The researchers divided 55 3-month-old babies into three groups, one of active play training, one of passive training and a control group that received no training. In both the training groups, babies played with a parent ten minutes a day for two weeks.

Because babies this young don’t have fine motor skills, they wore ‘sticky mittens’ covered in Velcro and played with Velcro-covered blocks.

After two weeks, all of the infants took a test in which they looked at pictures of objects and faces on a computer monitor while wearing an eye-tracking device. Only the infants from the active training group spent significantly more time looking at faces than objects, the study found.

What’s more, after controlling for gender, birth weight and parents’ education level, the study found that the more that infants reached out for toys, the greater their preference for faces.

But why would reaching behavior affect face preference?

The researchers suggest that by participating in an action, babies begin to understand themselves as independent agents with specific goals. This could help them see other people’s actions as intentional and might make them more interested in looking at their faces.

Alternatively, or perhaps in parallel, it could be that the brain has some kind of ‘motor resonance’ system that allows us to couple our own actions with those of other people. Research on mirror neurons lends some credence to that idea.

It’s a neat experiment with several smart controls, but it may be flawed by the fact that the researchers couldn’t measure the parents’ behavior. For example, it could be that the parents in the active training group, after watching their children learn to reach out for objects, treated them differently after the ten-minute session.

Still, if the results hold up, they might explain why the social deficits of children with autism are sometimes accompanied by motor and gait problems. Imagine the implications for autism therapies — you could potentially help children improve their eye contact and more complicated social interactions by working on their motor and play skills.