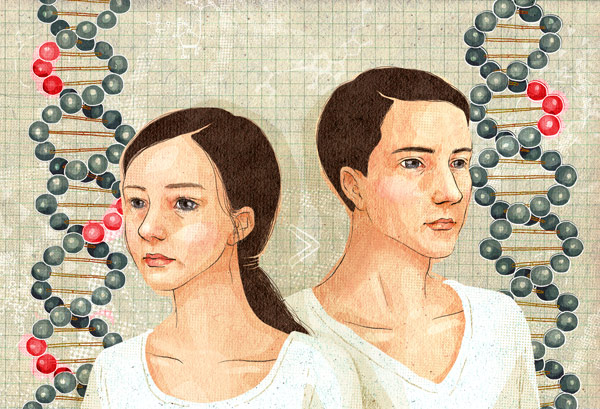 One of the most consistent findings in autism, and perhaps the most perplexing, is that it affects about four boys for every girl. This sex bias has become a hot topic in autism research — so much so that Molecular Autism devoted its entire May issue to it.

One of the papers in the issue ruled out the suspicion that there is a single gene responsible for the so-called ‘female protective effect’ — the apparent resistance of girls to mutations that cause autism.

Previous studies have suggested that the protective effect might be traceable to a single genetic location on the X chromosome. Alas, nothing in autism is simple. In the new study, researchers analyzed two large genetic databases of girls with and without autism and found no evidence for such a DNA hotspot.

This finding does not mark the end of the search, however. The protective effect likely stems from a collection of genes rather than a single one, the researchers say, and efforts to find those genes will continue.

A second study in the special issue centers on the thick bundle of nerve fibers that connects the brain’s two hemispheres. Previous studies have shown that this bundle, called the corpus callosum, develops differently in children with autism, losing some of its structural integrity over time. The new study uncovers some intriguing sex differences in preschool children.

Researchers used a scanning method called diffusion tensor imaging to compare the corpus callosum in 112 boys and 27 girls with autism, and 53 boys and 29 girls without the disorder, all aged 3 to 5 years. They found discrepancies between boys and girls with autism in both the structure and the organization of the nerve bundle.

Compared with the controls, boys and girls with autism show different patterns of fibers projecting to the brain’s frontal lobe. In boys with autism, the portion of the fibers connecting to the orbitofrontal cortex, a region involved in decision-making, is smaller than in typically developing boys. But the researchers saw no difference here between girls with and without autism. In girls with autism, however, a smaller section of the fiber bundle connects to an adjacent region, the anterior frontal cortex, than in typically developing girls.

It’s unclear how these differences might affect the workings of the brain, but the researchers speculate that they could contribute to the apparent resistance of girls to autism.

A third paper in the issue garners more support for the female protective effect. It found that children with older sisters on the spectrum are more likely to receive an autism diagnosis than are children whose older brothers are affected.

Together, the studies highlight several gender differences in autism that are ripe for further study. If researchers could find the responsible genes, for example, they might be able to use that knowledge to develop new treatments or even a way to help prevent autism.

Editor’s note: To kindle even more interest in this area, we are planning a special report of our own on gender differences in autism. Look for it in a few months.