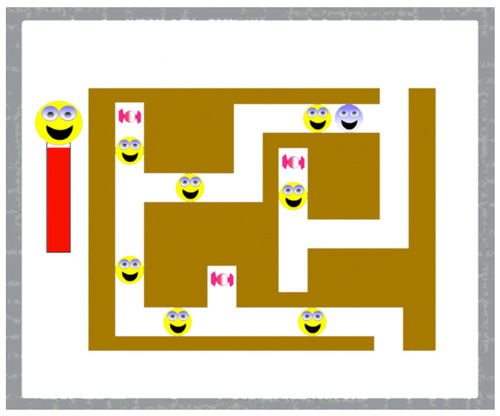 There’s a lot to be said for a well-timed fake smile. Feigning goodwill toward a work colleague or ex-boyfriend may be insincere, but it helps avoid hurt feelings and unnecessary conflict. Smiles that fall in line with social expectations help us navigate our relationships with others.

This, at least, is the argument presented in a study published 29 April in the Journal of Autism and Developmental Disorders. People with autism have trouble feigning expressions, the researchers say. So they have created a computer game that trains children with the disorder to produce “higher-quality” facial expressions.

Even when asked to look ‘happy’ or ‘sad,’ children with autism are less convincing than controls, studies say. They do better in front of a mirror, suggesting that the problem may lie in knowing how to produce the desired expression.

The researchers designed a video game to help children with autism practice this skill. In the game, a child can navigate a Pac-Man-like maze, bypassing obstacles (and winning virtual candy) by smiling long enough to fill up a ‘smile-o-meter.’

The system recognizes faces and judges these expressions in real time, based on 8,000 preprogrammed examples. If the smile deviates from the program’s norm, for example, the smile-o-meter stops.

In the study, 17 children with autism and 23 controls, all ranging in age from 6 to 18 years, played three levels each of a happy maze and an angry maze.

The researchers recorded the participants making angry, happy or surprised expressions before and after the training. College students — who did not know which participants have autism and which do not — rated these expressions on a scale of 1 to 6.

Overall, the children with autism made more convincing happy and angry expressions after playing the game than they had before — at least, according to the undergraduates. The children did not improve when mimicking surprise, however. This makes sense, because they didn’t practice this expression.

Interestingly, the training helped the children with autism catch up to controls when it came to smiling, but their angry expressions surpassed those of the controls.

For me, a larger question is whether we should be training anyone to produce ‘acceptable’ expressions at all. Expressions should be as individual the people making them.