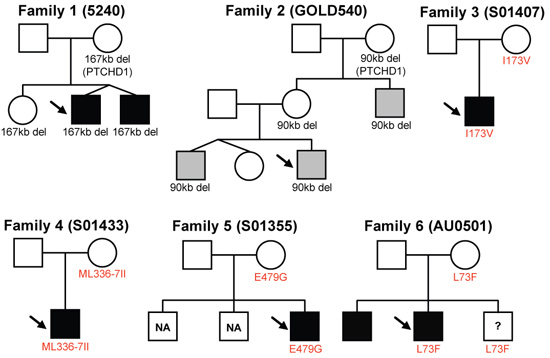 A newly characterized gene on the X chromosome may be disrupted in up to one percent of people with autism, researchers reported yesterday in Science Translational Medicine1.

In June, a genome-wide scan for genetic variations associated with autism and intellectual disability found a strong signal implicating the gene, PTCHD12. Researchers first flagged it as a potential autism-linked gene in 20083. The new study is the first to examine PTCHD1’s role in detail, delving into the different kinds of mutations that are seen in people with autism and bolstering evidence that the protein may be involved in a key developmental pathway.

The work also reveals a potentially significant pattern of inheritance: all of the people in the study with autism or intellectual disability who have PTCHD1 mutations inherited these genetic changes from their unaffected mothers.

Along with other X-chromosome genes that have been implicated in autism, PTCHD1 may help explain why autism disproportionately affects boys.

A boy with a damaged copy of an autism-linked gene on his single X chromosome is more likely to be affected by the disorder, whereas in girls, a second copy from another X chromosome may compensate for the damaged gene. This hypothesis has drawn increasing focus to the X chromosome in studies of autism genetics.

The researchers analyzed PTCHD1 in 1,896 people with autism and 246 with intellectual disability, and found 25 people with mutations affecting the gene. The most dramatic disruptions, seen in two different families, knocked out whole chunks of the gene — making the gene nonfunctional and providing a clear causal link to neurodevelopmental abnormalities.

“The two deletions that encompass the gene itself are good evidence that this locus can be a rare and highly penetrant cause of autism and intellectual disability,” says Stephen Warren, professor of human genetics at Emory University in Atlanta, who was not involved in the work.

In one of the two families, two brothers carry a copy of PTCHD1 in which one of the gene’s three exons, or protein-coding regions, is missing. One of the brothers has autism, and the other has a learning disability and milder autism-like symptoms. Their sister also inherited a copy of the X chromosome bearing the mutation, but doesn’t have any symptoms of autism — exactly as would be expected if her second X chromosome provides a protective effect.

Up to half of people with autism also have intellectual disability, and a variety of genes have been linked to both conditions.

In rare cases, such as in the brothers whose PTCHD1 gene is missing a protein-coding region, this single mutation appears to be enough to cause autism all on its own. But in most people with autism, multiple genes are thought to contribute to the condition. So the researchers looked for additional, subtler changes in PTCHD1 that may also play a role.

When they sequenced the protein-coding portions of PTCHD1 from 900 people with autism and 225 males with intellectual disability, they found seven different spots where the DNA sequence of PTCHD1 could be altered by a single letter. All eight of the study participants with these ‘missense’ mutations are male, and all inherited these genetic changes from an unaffected mother.

A third type of mutation occurs outside PTCHD1, at a location just upstream on the X chromosome that the researchers say may help regulate the gene’s expression. That area had been somewhat overlooked by the computer algorithms in the earlier genome-wide scan, because there are no protein-coding genes there.

But sometimes the human eye is more powerful than a computer, notes lead investigator Stephen Scherer, director of the Centre for Applied Genomics at The Hospital for Sick Children in Toronto, Canada. Scherer says it was clear to him “that the majority of the deletions are upstream to PTCHD1, and we should be looking for something else up there.”

Probing this region in 996 autism-affected families, the researchers found 9 people with autism who are missing chunks of DNA.

Strikingly, of 531 males without autism or intellectual disability, none have any of the missense mutations. The team was also able to look for upstream deletions in a larger number of control males, and found that none of the 4,829 people in this group had those changes.

“What’s very interesting about this paper is that this seems to be so penetrant,” says David Skuse, professor of behavioral sciences at University College London, who was not involved in the work.

Among males, “if you’ve got it you’ll either have autism or intellectual disability, or a combination of the two,” Skuse says.

To link the gene to autism more definitively, researchers would need to show that altered versions of the protein don’t work normally.

Vincent is already developing techniques to study the effects of PTCHD1 mutations — and its normal function. “We think it’s likely to be involved in the hedgehog signaling pathway, but we cannot say for sure,” Vincent says. The hedgehog pathway helps direct the formation of the brain, neural tube and other parts of the nervous system.

According to computer models, PTCHD1 has a similar sequence and protein structure as that of two known hedgehog receptors, PTCH1 and PTCH2. And like those two receptors, the research team showed, PTCHD1 inhibits Gli, a key protein in the hedgehog pathway.

“I think this is really exciting since it is the first indication of the hedgehog pathway being involved [in autism],” says Scherer. “With more work it might become a good drug target.”