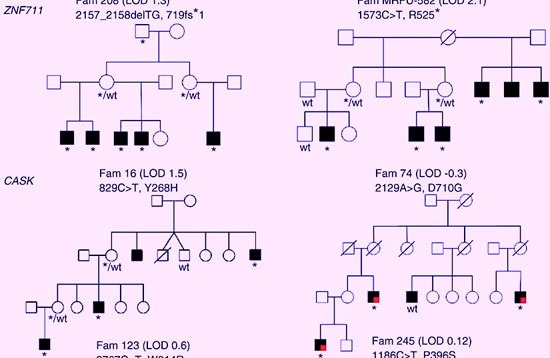 Family ties: New hunts for genetic culprits of autism and related disorders are focusing on variants (asterisks) on the X chromosome, which boys (squares) inherit much more often than do girls (circles).

Genetic studies to date have identified variations linked to autism in 21 of the 23 human chromosomes. Now, using a variety of new, high-resolution techniques, scientists are mining one of these chromosomes — the X — for a more comprehensive set of genetic anomalies associated with the disorder.

Acquiring this flood of new data may be much easier than interpreting it, however, according to scientists carrying out X-chromosome searches on people with related disorders.

For example, the largest-ever X-chromosome close-up in families with mental retardation, published in May, scanned over 200 million DNA bases and turned up nearly 2,000 sequence variations in men with the disease1.

The researchers then faced the daunting task of figuring out which of these variants are examples of normal human genetic variation and which lead to cognitive problems.

“Everybody in that study had variants, some of which had never been seen before in anybody else,” says David Nelson, professor of molecular and human genetics at Baylor College of Medicine, who wrote a commentary that accompanied the new study2. “So it’s a question of how can you build a case that [a variant] is actually causing mental retardation.”

To build this case, the scientists focused on 42 mutations that turn off one of the 800-odd genes on the chromosome. Using this short list of particularly disruptive variants, the researchers then checked that each is carried by other family members with mental retardation, but not by men without the disease. The team eventually determined that 26 of the 20,000 variants, located on nine different genes, are likely to have a causal role in the disease.

The new study screened families that have two or more men and few, if any, women with mental retardation. The gender disparity in these families hints at mutations on the X chromosome: because girls have two X chromosomes, damage to a gene on one chromosome could be mitigated by a normal copy of the gene on the second chromosome. Boys, who have only one X chromosome, could not benefit from this protective effect.

Autism’s strong male bias — four times as many boys develop the disorder as girls — suggests that it, too, could result from X chromosome aberrations.

Stephen Warren, professor of human genetics at Emory University, leads a group that’s looking much more closely at the X chromosome in people with autism.

Because combing the chromosome for small changes increases the likelihood of finding variants, Warren’s team will probably face interpretative challenges similar to those of the mental retardation study.

In that work, for instance, many of the healthy participants carried mutations that turn off genes. The investigators estimate that about one percent of genes on the X chromosome, in fact, can be mutated without any noticeable cognitive effect. “This would suggest that things are not as simple as they might seem,” Warren notes.

In the past year, spurred by the plummeting costs of new technologies, Warren’s team has taken two approaches to uncovering aberrations on the X chromosome in people with autism.

In the first, similar to the mental retardation study, powerful ‘second-generation’ sequencing machines4 are reading the DNA sequences of the protein-coding portions of the X chromosome of 300 boys with autism.

This involves reassembling up to 2.5 million DNA bases in each participant, a task that would take years with older sequencing machines. To make the project even faster, Michael Zwick, assistant professor of human genetics at Emory University, developed a method to isolate the protein-coding regions of interest before sequencing them5. “We can do the entire sequencing of our sample in about four or five months,” he says.

During data analysis, the researchers will focus on sequence changes that disrupt genes, Zwick says. But these variants won’t necessarily cause autism. As demonstrated by the mental retardation study, healthy people also carry these rare variants, some of them unique.

“This is sort of one of the dirty little secrets of genetic variation that I think people don’t quite appreciate,” Zwick says. “Just looking at the rarity of an allele is not compelling statistical proof about its role in a disease.”

To bolster the case for a variant’s involvement in autism, Zwick will check healthy siblings to be sure that they don’t carry it. He will also look for ‘recurrent’ variants — changes that occur on the same gene in different, unrelated people. When multiple rare variants converge on the same gene, this raises suspicions about the gene.

Still, the probability of finding recurrent variants is lower when a disorder stems from disruptions in a number of different genes — as is the case for both autism and mental retardation — than when it arises from a single gene, he says.

In a second group of experiments, rather than restricting their search to protein-encoding regions, the team is scanning the entire X chromosome of 200 men with autism.

The scientists are looking for particularly small copy number variations (CNVs) — duplications or deletions of DNA segments. Large CNVs are more common in people with autism than in healthy people, and Warren says that smaller ones may also increase the risk of developing the disorder.

The DNA chip used in this project can detect CNVs as short as 500 bases — about 200 times smaller than what’s previously been found. So far, this approach has turned up CNVs that may have subtler contributions to autism than do the typical CNVs that take out multiple genes, Warren says.

For example, the researchers have found small CNVs in promoter regions of several genes, which could alter gene expression rather than wipe out its function. “[The gene] may be still producing whatever the protein is, but maybe not quite at the right level,” he says.

Warren suggests that these subtle changes are not sufficient by themselves to cause autism, but may add to the overall burden of genetic and environmental factors that up the risk of developing the disorder.

As the new data from Warren’s studies roll in, other researchers are trying to make use of the extensive data on single-nucleotide polymorphisms (SNPs) — variants commonly found in the general population — that are routinely identified in genome-wide association studies (GWAS).

GWAS track whether specific SNPs are preferentially carried by people with particular traits or diseases. Because they require huge samples, GWAS usually include data from both men and women. When looking for SNPs on the X chromosome, however, a mixed-sex sample makes statistical calculations difficult because men have a single X chromosome and women have two.

“Everyone does the GWASes and they ignore the X,” says Eden Martin, professor of human genetics at the University of Miami.

Considering the X chromosome separately for each sex isn’t an ideal solution because it decreases sample size and the power to find SNPs associated with disease, Martin says.

At the International Meeting for Autism Research in May, Martin presented a new statistical method to get around this problem. Applying it to a data set of tens of thousands of SNPs on the X chromosome from 4,801 people of both sexes, Martin found that compared with their parents, children with autism preferentially carry certain SNPs located on two genes — one that had been implicated before and one that had not.

Analyzing both sexes together boosted the statistical power of her study to finger these genes, Martin says. “The X deserves another look; it’s just a matter of how to be smarter about it.”