Who are you going to believe, your body or your lying eyes? 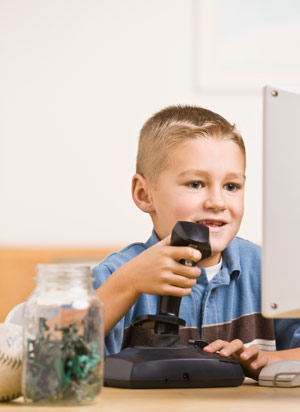 Children with autism tend to rely more on their bodies when learning new motor skills, while controls rely more on their eyes, suggests unpublished research presented Wednesday at the 2014 Society for Neuroscience annual meeting in Washington, D.C.

Many children with autism have difficulties with motor skills, a problem that has received increasing attention in the past several years. Scientists are probing how these motor deficits arise and how they play into the social deficits characteristic of autism.

Researchers have designed a video-game-like test to tease out the relative contributions of vision and body awareness, or proprioception, to motor skills. In the study, 20 children with autism and 20 controls, all around 10 years old, sat in front of a horizontal screen and moved a cursor toward a target using a joystick hidden from their view under the screen,.

The challenge was that sometimes the joystick forced the player’s hand off to the side — by either a little bit, a little more or a lot. Sometimes the cursor also diverged from the joystick’s path, again to varying degrees.

“So we have this whole mix of visual and proprioceptive errors that kids can get,” says Mollie Marko, who presented work she did as a graduate student in Reza Shadmehr’s lab at Johns Hopkins University in Baltimore.

Sensors recorded how the participants changed the force they applied to the joystick after one of these errors. That change represents learning in response to the error, the same basic process that underlies how we learn everyday skills such as walking or riding a bicycle: Try, fail and move your body a little bit differently the next time.

The researchers also scanned the brains of the participants to look for clues about where in the brain these different learning patterns arise.

They found that among children with autism, a region of the cerebellum that is linked to sensory and motor function is smaller than it is in controls. The smaller this region, the less sensitive the child is to visual feedback and the more to body feedback.

Lower sensitivity to visual feedback may play into the difficulties children with autism have in imitating others, Marko says. And relying too much on body feedback may contribute to their sensory sensitivities.

But thinking of these altered learning patterns in children with autism merely as deficits is too simplistic, Marko says. “They’re learning better than typically developing kids in some ways.”

In versions of the video game task in which the movement of both the joystick and the cursor are perturbed in the same way — meaning that the joystick and cursor match up despite the error — children with autism perform the same as controls. “This normal motor output looks the same as in typically developing kids, but it’s coming from different building blocks,” Marko says.

This suggests that interventions could be designed to play to the strengths of people with autism — for example, behavioral therapy that builds on their proprioceptive skills rather than on imitating the therapist.