Wearable sensors may predict aggression in people with autism 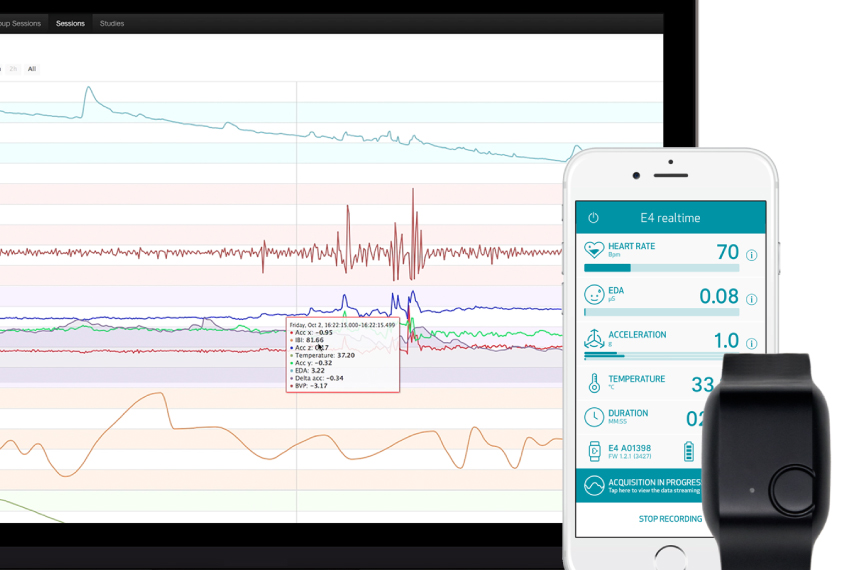 Personal prediction: This wrist sensor can signal to caregivers that a nonverbal individual with autism is in distress.

A small wristband gives caregivers a one-minute warning that an individual with autism is about to become aggressive toward himself or others. Researchers presented the unpublished results today at the 2018 International Society for Autism Research annual meeting in Rotterdam, the Netherlands. ­­

Because it is unpredictable, aggression has significant quality-of-life ramifications for people with autism and their caregivers, says co-lead researcher Matthew Goodwin, associate professor at Northeastern University in Boston, Massachusetts, who presented the findings­. “Parents, who know their kids better than anybody, oftentimes have a hard time predicting when their kid is going to engage in some of these behaviors,” he says.

The device, made by a Massachusetts-based company called Empatica, detects an individual’s heart rate, sweat levels, movement and skin temperature.

Using a combination of these features, the sensor predicts an aggressive outburst with 70 percent accuracy. When researchers program the device with an individual’s own data, the accuracy rises to 84 percent.

Child psychiatrists have traditionally tried to understand behaviors such as aggression only after they occur, says co-lead investigator Matthew Siegel, associate professor of psychiatry and pediatrics at Tufts University in Massachusetts. Instead, he and his colleagues are trying to forestall the behaviors.

“We’re looking for whether there’s another way to approach this,” Siegel says. “If we use some objective signal to predict when someone is going to have a tantrum, we don’t have to infer anything, and we can get ahead of it, which is a real shift.”

To train the device to recognize the warning signs of an outburst, the researchers worked with 20 nonverbal individuals with autism who had been admitted to an inpatient psychiatric unit. The participants wore the wristband as they went about their typical day. (The only difference from a regular day was that a research assistant shadowed them and recorded their outbursts.)

The team collected data for 87 hours, during which the participants had 548 aggressive episodes. They looked at variables that might predict an outburst from three to one minutes before an episode.

The researchers used a machine-learning algorithm to analyze their data.

The algorithm is most effective when it includes all of the measures that the device detects, and when it is personalized to each individual.

However, being able to use a generalized predictor would make the device accessible to more people. If the algorithm includes data from more participants with autism, it might match the accuracy of personalized predictions, Goodwin says.

The device is not yet ready for clinical use, but it showcases the potential of the approach, experts say.

“The findings are intriguing because they demonstrate the range of opportunities that mobile technology provides for directly measuring behavior from individuals with [autism] in multiple contexts,” says Rebecca Jones, assistant professor of neuroscience in psychiatry at Weill Cornell Medicine in New York, who was not involved in the study.