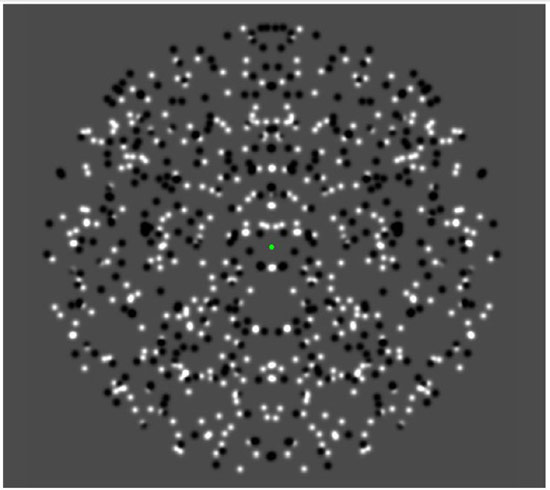 Mirror image: People with autism are better than typical controls at identifying horizontal and diagonal lines of symmetry.

People with autism are highly adept at detecting symmetry in patterns, according to a study published 29 April in PLoS ONE1.

Studies have shown that people with autism are particularly good at perceiving individual details, but the new findings suggest that they can also detect large-scale patterns effectively.

The study reflects increasing interest in the distinctive way that people with autism process visual information. Though they are known to have difficulty recognizing familiar faces and correctly interpreting facial expressions, evidence suggests that their non-social visual processing skills may be superior to those of healthy people.

“People with autism can have both strengths and weaknesses in visual-spatial processing and cognition,” says Louise Gallagher, professor of psychiatry at Trinity College Dublin. “This may be related to [their] underlying genetic deficits.”

Gallagher was not involved in the new study, but work in her lab has also pointed to strengths in non-social visual processing in small samples of people with autism.

The new study tests a phenomenon called visual grouping in which 500 pairs of dots are arranged within a circle to form a pattern. The researchers showed the study participants 25 pairs of these patterns, and asked them to press a button to indicate which of each pair was symmetrical.

“For this particular task, the end product was an enhanced ability to extract a global pattern from within noise,” says principal investigator Armando Bertone, professor of psychiatry at the University of Montreal. “Social deficit models predict that people with autism would not show this vertical advantage in symmetry detection.”

Numerous studies have shown that people with autism process visual information differently from others2.

Some have shown that people with autism perform better than controls on tasks involving characteristics such as visual acuity, or clearness of vision3. Other studies have found that their performance on higher-order processing tasks, such as face recognition, is impaired4.

Researchers have speculated that people with autism are better at focusing for long periods on an object, and that this may explain their superior visual performance. But Bertone says this doesn’t explain why their performance varies from task to task.

In 2005, for example, he reported that a group of participants with autism exhibit both enhanced and diminished visual processing on the same task, depending on the complexity of the stimuli5.

These conflicting findings have been interpreted within the context of two opposing theories.

According to the first, the weak central coherence model, people with autism perceive details better than others, but have trouble integrating the components into a large-scale pattern6.

The model also predicts that people with autism would have a disadvantage in detecting vertically symmetrical patterns, but the new findings contradict this, Bertone says.

His findings lend support to an alternative model, which suggests that enhanced perception is a core feature of autism7.

“There is extensive literature suggesting that there is superior visual processing in autism,” says Jane McGrath, a postdoctoral fellow in Gallagher’s lab at Trinity College Dublin. “Typically this process is tested using non-social tasks.”

Earlier this year, she presented evidence that people with autism are better able to visualize objects rotating in space.

Abnormal neural connectivity may play a crucial role, she says, by altering the brain’s visual pathways and the way it processes visual information.

Bertone, too, explains atypical visual processing in terms of connectivity. He suggests that the enhanced ability observed in the new study is the result of alterations in the wiring of the visual cortex.

McGrath points out that enhanced perceptual abilities are not always an advantage. “Individuals with autism notice tiny changes in their environment, such as a book out of place on the shelf,” she notes, “and this often leads to considerable distress.”