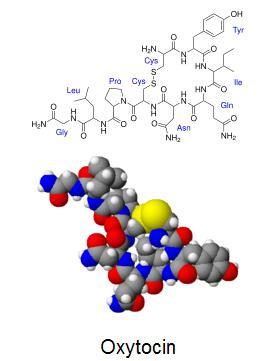 In oxytocin we trust: Prompted by reports of the hormone’s effects on social bonding, parents are giving it to children with autism.

The so-called trust hormone oxytocin could prove to be an effective treatment for autism, but it’s premature for parents to be dosing their kids with the hormone, researchers warn.

Giving people oxytocin has shown that the hormone boosts the willingness to trust others. Animal studies and small clinical trials have also linked the hormone to autism.

Biologically, that link is plausible because oxytocin is important for social bonding and cognition, and eases anxiety and repetitive behaviors ― all features of the autism spectrum disorders.

“Oxytocin seems to affect social skills positively, so the prediction is that oxytocin administration will improve empathy,” says Simon Baron-Cohen, director of the Autism Research Centre at the University of Cambridge. “But we still have to confirm this.”

In May, Swiss researchers made the latest contribution to this growing body of evidence1. In a game, the researchers asked volunteers to hand over money to others for investment. Participants given oxytocin ponied up even after they had been cheated once.

Functional magnetic resonance imaging (fMRI) scans revealed that the hormone reduces activity in the amygdala, which processes fear and risk of social betrayal, and the striatum, which guides and adjusts behavior based on expected rewards.

A clearer picture of the hormone’s ability to maintain trust could help treat autism. Only one drug on the market, Risperdal ― which decreases irritability ― addresses the behavior problems associated with autism.

“For social deficits and language deficits, we really don’t have any medications that reliably help,” says Thomas Owley, head of the University of Illinois at Chicago’s Neurodevelopmental Pharmacology Clinic.

The first evidence that oxytocin might ease autism symptoms came in the 1990s from research on prairie voles2. Prairie voles are monogamous and form strong pair bonds when they mate. Blocking oxytocin receptors in the animals’ brains, researchers found, prevents social bonding but not mating.

These findings sparked an interest in the hormone’s importance for social bonding in people. Blood tests later showed that children with autism have lower levels of oxytocin in their plasma than their normally developing peers3.

Two pilot studies of oxytocin in high-functioning adults with autism have shown promising results. A 2003 investigation showed that the hormone alleviates body rocking and other repetitive behaviors4.

And in 2007, neurologist Evdokia Anagnostou and colleagues at the Mount Sinai School of Medicine reported that the hormone helps people pick up on the emotional content of speech, enabling them to discern whether a neutral sentence, such as “The boy went to the store,” is read in a happy, indifferent, angry or sad tone5. This positive effect lasted for up to two weeks.

Those studies administered oxytocin intravenously. At least three research groups are instead developing nasal sprays, which are easier to use and would deliver the hormone to the brain faster.

Anagnostou is leading a pilot study with 20 adults with autism in which the participants would sniff oxytocin twice a day for six weeks, once in the morning and once at noon “to cover as many of the hours during which they have social interactions as possible.”

The goal is to ascertain the long-term effects of the treatment ― whether it’s safe and effective, and how long the benefits last. If the therapy proves viable, the next step would be to test it in children.

Baron-Cohen is leading another study of 25 high-functioning adults with autism and Asperger syndrome which will look at how the drug affects the participants’ ability to discern emotion, and their systemizing and attention to detail ― often strengths of people with the disorder.

“Before just rushing in, we really want to be a bit more cautious and just isolate those aspects of autism that people with diagnosis themselves would say, yes we would like help with that, rather than taking away what’s special about autism,” says Baron-Cohen.

Nastech, a pharmaceutical company based in Bothell, Washington, is testing a synthetic form of the hormone, called carbetocin, which is expected to last longer in the body than its natural counterpart. That product could be on the market in seven years6.

In the meantime, prompted by reports of oxytocin’s effects, some parents have given their children oxytocin nasal sprays, which are available in Europe and Canada to promote lactation in new mothers. The hormone is not approved to treat autism in those countries or in the United States, however.

“I think it has become very popular too fast,” says Anagnostou. “We haven’t done our due diligence yet for oxytocin.”

A team in January launched a large-scale study investigating the genetic link between oxytocin and autism.

Psychiatrist Suma Jacob and her colleagues are measuring peripheral blood levels of the hormone and the expression of genes related to the oxytocin system in the 650 children they plan to enroll and in their parents.

“Looking at families might give you clues about specific genes that are involved and if they are related to changes in individual physiology or behavior,” says Jacob, a psychiatrist at University of Illinois at Chicago. “I think we’re going to learn a lot in the next few years about this system.”

Jacob and others have already found mutations in the oxytocin receptor gene in Caucasian and Chinese Han children with autism7.

Jacob and Anagnostou plan to collaborate in order to link the treatment to the genetics. “There’s a lot of potential in oxytocin, but we haven’t even documented either safety or efficacy yet,” says Anagnostou. “We need to clarify these before we can say this is a safe, long-term treatment that has efficacy, and for whom it has efficacy.”