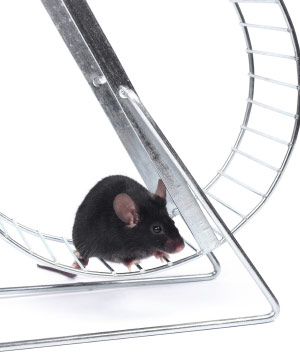 Repeat run: An autism mouse model shows as much interest in a wheel that has been broken for three days as in another mouse placed in its cage.

Researchers can evaluate core features of autism, such as social deficits and stereotyped behaviors, by watching how mice that are used to running on a wheel react when the wheel is broken, according to a study published 24 May in Behavioral Brain Research1.

Using this method, the study found that BTBR mice — which have several autism-like characteristics — are inflexible, and have repetitive behaviors and little social interest in other mice when compared with control mice.

Tests for autism-like behavior in mice are key for validating mouse models and for assessing the behavioral effects of potential treatments.

Researchers often measure repetitive behaviors in mice by recording their self-grooming, jumping, digging or compulsion to bury marbles placed in the cage. To evaluate inflexibility, they train mice in a complex task and then change it. In one such task, for example, the mice have to find a platform that allows them to escape from a container of water after researchers move its location. But this type of experiment can make the mice anxious and confound the results.

In the new study, researchers placed mice in a cage with a wheel every day for seven days. Mice enjoy wheel-running, and the researchers measured how soon the mice began running at the start of each day. On the fifth day, the researchers jammed the wheel so that it wouldn’t work, and on the seventh they added a second mouse to the cage.

Two strains of control mice adapted quickly to the wheel, and ran shortly after entering the cage. They also liked to dig holes in the bedding when not running, an example of repetitive behavior, but did this less on the fourth day when the wheel was working than when it was jammed on the fifth.

These mice also tried to run on the wheel less on the fifth day than on the fourth, even less the sixth day, and all but abandoned the wheel in favor of social interaction on the seventh day, when the researchers introduced a new mouse into the cage.

By contrast, BTBR mice dug holes extensively, showing little interest in the wheel. When the researchers repeated the experiment without providing bedding, however, the BTBR mice chose to run on the wheel to the same extent as controls.

Intriguingly, another mouse model, which has an autism-linked mutation in neuroligin-3, shows the same level of interest in the wheel as controls do. This could be because it takes a number of different mutations to lead to autism-like social deficits in mice, the researchers say.