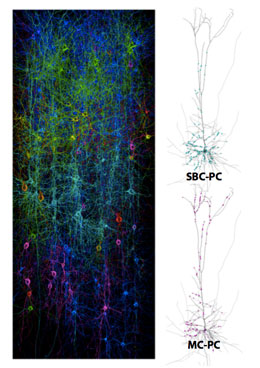 Virtual reality: In a reconstructed brain, neurons placed together into a network form junctions at points of contact (right, blue and purple dots).

Researchers are assembling a virtual reconstruction of the brain by piecing together simulations of thousands of neurons, they reported 16 October in the Proceedings of the National Academy of Sciences. They used this model to show that most junctions between neurons form randomly and not as the result of chemical signals1.

The human brain contains billions of neurons, each of which has long, branching projections, or axons, peppered with signal-emitting terminals. On the other side of the cell body, branches called dendrites join the terminals to form synapses, which relay information across neurons and ultimately the whole brain. Mapping this staggeringly complex network of interactions remains one of the major challenges of neuroscience.

In the new study, researchers used data from an ongoing project to build a computer-simulated brain. The project aims to assemble a brain by simulating individual neurons based on known features such as their anatomy, gene expression and signaling properties. The researchers then place these neurons individually into large networks.

So far, the venture has recreated a network of 10,000 neurons from a region of the rat cortex. This network is 1 of 100,000 such networks, or columns, in the rat brain. Human brains have as many as two million columns made up of ten times as many neurons.

The researchers used the simulated network to investigate how synapses form. During development, chemical and molecular signals influence which neurons develop from progenitors and where they migrate to in the brain. Once neurons are in place, however, it was unknown whether they randomly form synapses or whether this step is also tightly regulated.

The researchers identified synapses in a slice of brain tissue from a rat sensory motor cortex and created a map of their positions along axons and dendrites. They compared this to a virtual reconstruction of the same brain region built from 298 neurons from different animals, but all from the sensory motor cortex.

The researchers placed the neurons randomly in a space equivalent to one column in the rat cortex. When the axon of one neuron comes into close contact with the dendrite of another, the simulation indicates it as the site of an active synapse.

These simulated synapses match those in the rat brain about 74 percent of the time, the study found. This suggests that the majority of synapses form when axons and dendrites happen to touch, and are not mediated by an additional signaling step, the researchers say.

The researchers also identified exceptions — cases in which synapses are seen in the statistical model but not in the rat brain. For example, axons bump into the cell bodies of other neurons in the simulation, but never in an actual brain. Chemical messages may prevent this by repelling nearby neurons, the researchers say.