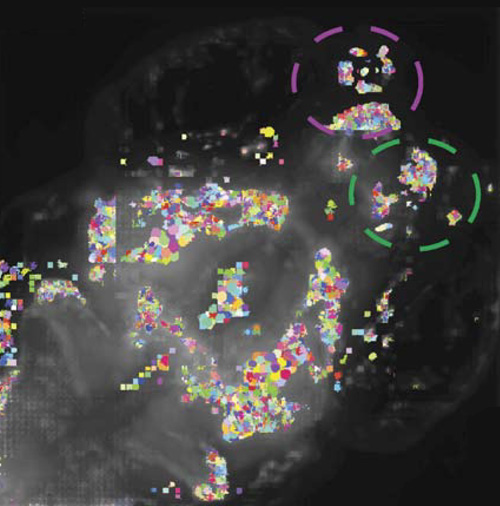 Whole brain: A new tool captures the more than 5,000 neurons that light up throughout the brain of a zebrafish exposed to an odor.

A new imaging technique can capture the activity of every neuron in a zebrafish larva or a roundworm. Researchers described the method, which is at least ten times faster than others, 18 May in Nature Methods1.

Understanding how neurons process sensory information can help researchers decipher brain function, and where it goes awry in disorders such as autism.

There are several methods available for assessing brain activity. One technique rapidly scans through the brain to capture 80 percent of neurons firing at any given time. Another snaps sharp images that can be reassembled to create a three-dimensional (3D) view of a brain. Yet some neuron activity remains unobserved because it is either outside the field of view or happening too quickly to be recorded.

The new method has a wide enough field of view to cover the entire body of a roundworm, Caenorhabiditis elegans, and still maintains a resolution fine enough to distinguish individual neurons.

The researchers used a 3D imaging method called light-field microscopy that captures all the light rays in the field of view in the same instant. This feat relies on an array of micro-lenses that collect light from different angles and a processor that combines those many perspectives into a 3D view. The same concept is used in the commercial Lytro camera, which allows photographers to focus a picture after it is taken.

They then engineered a roundworm with neurons that flash red when they fire. Using the new method, they observed the activity between the neurons in the worm’s head and the motor neurons located along its ventral nerve cord and connected to its body-wall muscles.

They also recorded the coordinated activity of about 5,000 cells across the brain of a zebrafish larva in milliseconds. The researchers immobilized the fish’s body in gelatin while it was exposed to the odor of decomposing fish. The high speed of the recording revealed subtle differences in the timing of groups of neurons as the fish reacted to the odor.

The next steps are to boost the technique’s image resolution and processing efficiency, the researchers say.