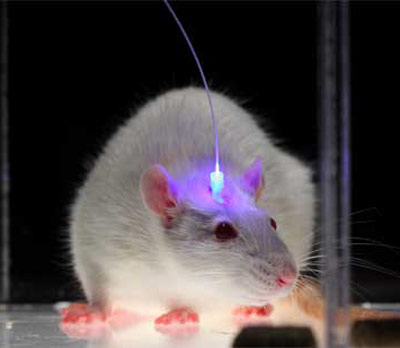 Beaming brains: Optogenetics, which uses light to activate neurons, allows neuroscientists to study specific circuits one at a time.

By shining a beam of light on a single brain circuit, researchers can compel mice to overcome their natural fears and boldly explore a new space, according to a study published 9 March in Nature. Drugs that act on this circuit could help relieve anxiety in people, the study suggests.

Nearly 30 percent of people will experience clinical anxiety — a prolonged state of worry or nervousness — at some time in their lives, making it the most common psychiatric disorder. More than half of children with autism are diagnosed with an anxiety disorder, according to some reports.

Several groups have proposed that the seat of anxiety in the brain is the amygdala, an almond-shaped region known to regulate emotion. The amygdala is active, for example, when someone is trying to interpret a facial expression, and imaging studies have shown abnormal amygdala activation in people with autism. But no one had identified precise neural circuits involved in anxiety.

Karl Deisseroth and colleagues at Stanford University probed a circuit in the amygdala using a technique called ‘optogenetics‘ that they pioneered. The researchers first genetically engineer mice to carry light-sensitive proteins in certain brain cells. They then use a laser beam — through a fiber-optic cable in the skull — to trigger those cells to fire.

In the new study, Deisseroth’s team zapped this circuit as a mouse explored an elevated four-arm maze. Normally, mice are afraid to venture into unfamiliar, wide-open spaces. But when this circuit was activated, their apprehension disappeared. The researchers also repeated the experiment by inserting light-sensitive proteins that inhibit the circuit. Stimulating the circuit caused these mice to recoil in fear.

The circuits involved in autism and other psychiatric problems have been infamously difficult to untangle. Optogenetics allows neuroscientists to study specific circuits and cell types one by one.

For instance, in 2009, Deisseroth’s group used the same method to pinpoint the cells responsible for gamma oscillations, the super-high frequency brain waves that are thought to play a role in autism and schizophrenia.