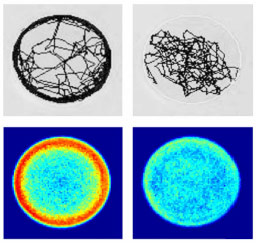 Swim test: Zebrafish larvae lacking the Rett syndrome gene swim in the middle of an enclosure (right) rather than hugging the sides (left).

Mutating the Rett syndrome gene in zebrafish allows researchers to investigate the disorder early in development, according to a study published 16 July in Frontiers in Neural Circuits1.

Rett syndrome, which is primarily caused by mutations in the MeCP2 gene, is characterized by a loss of language and motor skills after 2 years of age. However, abnormal neuronal development may occur before the appearance of symptoms.

Researchers have modeled Rett syndrome in mice by deleting a single copy of the gene (which is on the X chromosome) in males. These mice have motor, learning and memory deficits, and clasp their paws together in a manner reminiscent of the hand flapping seen in Rett syndrome. They are also sterile and have significantly shortened lifespans.

In the new study, researchers introduced a mutation into one or both copies of the zebrafish MeCP2 gene that prevents production of the protein.

Unlike the Rett mice, the zebrafish lacking MeCP2 have only a slightly shortened lifespan and are fertile, the study found. This may be because zebrafish are able to make new neurons throughout life in certain brain regions, and so can better combat the effects of the mutation.

When normal zebrafish larvae are startled, they bend into a C-like shape and then swim away. The fish lacking MeCP2 spend longer in this bend after being tickled with an eyelash than do controls. When swimming freely around a circular space, the mutant larvae also spend most of their time in the middle, whereas controls hug the walls of the chamber.

These deficits may indicate an imbalance between neurons that activate signals and those that inhibit them, the researchers say.