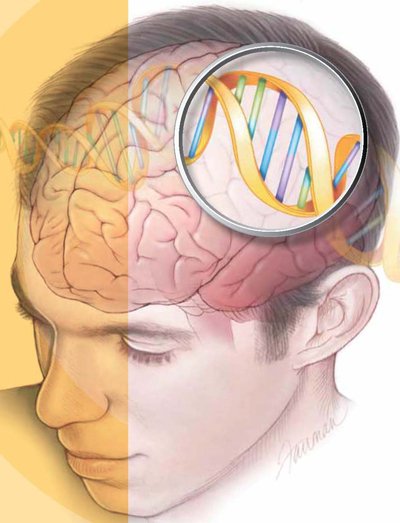 National Institutes of Health Body building: Among solid tissues, the brain shows the most distinctive pattern of gene expression.

A new resource reveals how gene expression varies greatly across different types of tissues but less so in the same tissue type among individuals.It also begins to decode the genetic roots of this variation.The findings, described 8 May in Science,indicate that the brain’s gene expression signature is unique1.

Many studies examining how genetic variation affects gene expression focus on accessible sources of DNA, such as blood. But patterns of gene activity in blood cells may differ from those in the brain, for example. For this reason, autism researchers often debate the ‘ideal’ tissue for gene expression studies.

In 2010,members of the Genotype-Tissue Expression (GTEx) Consortiumset out to create a database and tissue bankthat would help establish links between variations in DNA sequence and gene expression in different tissues. The new paper and several companion articles detail their efforts five years into the project.

The researchers analyzed tissue collected from 175 people soon after they died. The samples came from29 solid organs such as the heart and liver, 11 brain regions, skin and blood.

The researchers probed 4.3 million places in DNA where the sequence tends to differ among people.For many of the samples, they also sequenced all of the messenger RNA — the molecular intermediate between DNA and protein — to determine which genes are active.

To better understand why tissues vary in their gene expression patterns, the researchers looked at variants in regulatory regions of the genome. They focused on nine tissues, including muscle and skin, but not the brain. Some variants appear in all nine tissues, whereas others are tissue-specific, the researchers found. This finding suggests that each tissue in the body needs a baseline level of regulation as well as a layer that makes it unique.

The researchers also looked at how cells mix and match sections of genes to form different versions of the same protein. This process, called alternative splicing, has been implicated in autism.Consistent with past research, they found that splicing patterns in the brain diverge from those in the rest of the body, hinting that this process may be what makes the brain unique.

Partially processed data from the project are available at the GTEx Portal. Researchers hoping to access the data in raw form can apply through a government-run gateway. The consortium aims to analyze tissues from 900 people.