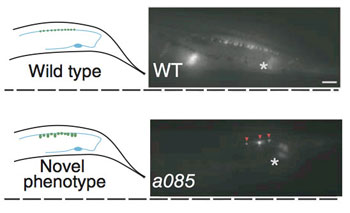 Mixed signals: A protein normally localized to neuronal junctions (top) is found in axons in a subset of mutant worms (bottom).

Researchers have built a new tool that can sort through a population of mutant nematodes and identify those with altered neuronal connections, according to a study published 19 August in Nature Methods1.

This technique is about a hundred times faster and pinpoints ten times more mutations than manual identification. It can also find structural changes to synapses, or neuronal junctions, that are too subtle to be detected by the human eye, the researchers say.

Caenorhabditis elegans is a miniature nematode with a simple brain and nervous system. Researchers have used the worm as a model system to study candidate genes for autism.

In the new device, the worms are moved one at a time into a chamber chilled to 3 degrees Celsius, a temperature at which they are immobilized.A camera fitted to a microscope photographs each worm. Software built into the tool then analyzes the photos and categorizes the worms as mutant or normal, and the device moves the mutant worms into a separate chamber.

To identify mutant worms, the researchers tag a structure of interest with a fluorescent molecule. In this study, they used RAB3, which is located at synapses.

The device then uses a new algorithm to identify synapses in the images without any input from the researchers. It applies 30 preprogrammed criteria — such as the number of synapses in a worm, the size of the synapses and the distance between them — to determine whether they are typical or altered by mutations.

The researchers used this method to screen 20,000 worms exposed to a mutagen. From these, they identified nearly 60 mutant worms with altered synapses.

One of the worms has a previously unidentified defect. Neuronal projections, or axons, in this worm contain large protrusions filled with proteins usually located at the synapse. The finding suggests that the method can detect alterations that are not visible to the human eye, the researchers say.