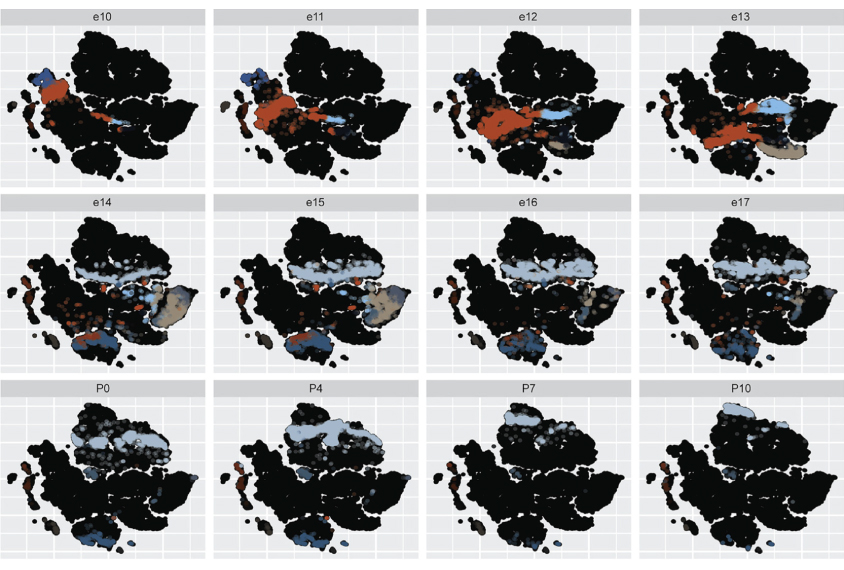 A new database displays gene-expression patterns in individual cells of the developing mouse cerebellum over time1. The tool may provide clues to how the cerebellum develops differently in people with conditions such as autism.

The cerebellum is involved in motor coordination, language and social interactions; it is thought to play a role in autism. Like some people with autism, those with injuries to the cerebellum may have repetitive behaviors and difficulty understanding social cues. And some autism-linked genes, such as PTCHD1 and ASTN2, are highly active in the brain region.

Researchers typically analyze gene expression in the cerebellum in chunks of tissue that contain a mixture of cell types. The technique blends expression profiles of different cell types.

In the new study, researchers examined the cerebellum of mice at 12 time points, from 10 days after conception to 10 days after birth. They used enzymes to break down the tissue into single cells. They wrapped each cell in an oil droplet containing the ingredients needed to create DNA copies (cDNA) of each cell’s messenger RNA (mRNA) — the transcripts of genes that serve as blueprints for proteins.

The researchers sequenced between 3,500 and 15,000 unique cDNAs from nearly 40,000 cells. Machine-learning algorithms analyzed the cDNA and plotted each cell in 2-D space, based on the genes it expresses. The researchers also grouped cells into types and lineages using the expression of certain ‘marker’ genes.

Cells that express similar genes cluster together in space. Those from the same lineage, however, show a range of gene-expression profiles, depending on their stage in development. The data highlight the prevalence of various cell types and lineages in the cerebellum over time. They also reveal which genes are turned on and off in those cells as the cells mature, migrate and form brain circuits.

“It’s amazing that development goes right so often, because the process is so complicated,” says lead investigator Charles Gawad, a pediatric hematologist-oncologist at St. Jude Children’s Research Hospital in Memphis, Tennessee. The study was published in September in Current Biology.

The atlas is available online through an interface called Cell Seek. It could be used to explore how mutations linked to autism affect gene expression in the developing cerebellum.