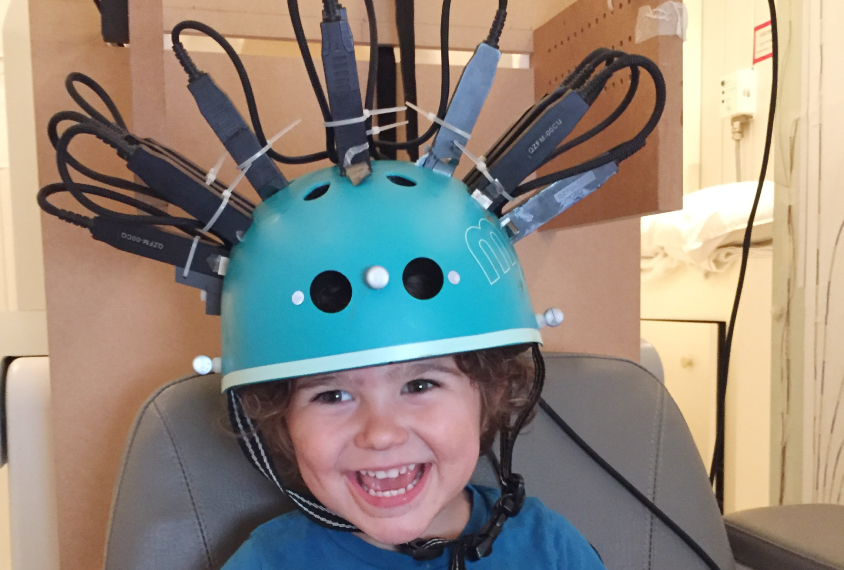 Spin cycle: A new device scans the brains of autistic children who may find it difficult to stay still.

Traditional scanners require people to keep their heads still to avoid blurring the images. This can be challenging for autistic children, who are often anxious, sensitive to noise or liable to fidget.

Traditional MEG technology uses electromagnetic sensors that are fixed in a bulky system, which sits above a person’s head. A new generation of lightweight MEG sensors, 3-millimeter cubes, can be placed anywhere on the scalp.

The researchers had previously added these petite sensors to a 3D-printed helmet. But the helmets had to be custom-made for each person and were too heavy for infants and small children to wear2.

The team built the new device by mounting the sensors on ordinary bicycle helmets, which come in a range of sizes. They tested the device on two children, aged 2 and 5 years, who watched television while their mothers stroked their hands. The device clearly registered the children’s brains responding to that tactile stimulation.

In another experiment, a 24-year-old wore the device as she learned to play the ukulele. This required the woman to read the music from a screen, look down at the instrument and move her fingers to play it. Despite these movements, the researchers obtained clear readings of her brain activity. The work appeared in November in Nature Communications.

The findings suggest that similar devices could be used to scan children as they grow, facilitating long-term studies on brain development.