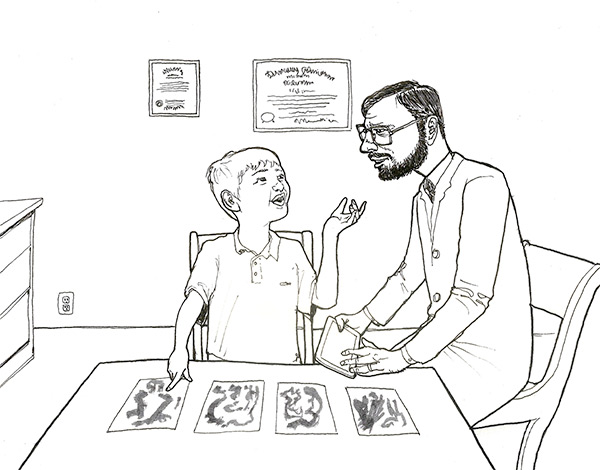 Vin Ganapathy Friendly chat: One task in a test to assess social language asks children to tell a story based on four images.

A test designed to characterize natural, spontaneous language use in autism shows solid promise in its first trials in typically developing children. The results were published 15 July in the Journal of Autism and Developmental Disorders1.

Delayed speech and communication difficulties are well-established hallmarks of autism. But the severity can vary significantly: Nearly one-quarter of people with autism are nonverbal, yet others speak with a fluency that may exceed their comprehension skills. Some people with autism speak with obvious abnormal patterns such as echolalia, whereas others show only slightly atypical word and grammar use.

This variety means that diagnostic tests may not capture subtle yet marked differences in the way people with autism speak. Many tests cannot assess differences in language use in social situations. For example, the examiner may ask ‘What are these?’ and point to a picture of pigs, prompting the children to answer, rather than listening to how they speak naturally. Children with autism tend to score high on these tests but still lack conversational skills, according to their parents’ reports2.

For the new study, researchers designed a test called the Observation of Spontaneous Expressive Language (OSEL) in order to measure subtle speech variations in children with autism. The test elicits and measures natural, conversational speech patterns during several play-like tasks.

The researchers assessed the ease of use and reliability of the test in 180 typically developing children in Michigan, ranging in age from 2 to 5 years. They confirmed that the youngest children can do the various tasks on the test and that the codes developed for the test match the skills of the oldest children.

The tasks include talking to the examiner while putting together a toy, telling a story based on pictures and taking the lead in pretend play involving a camping and picnic trip. Several conversational gambits assess the children’s use of different word classes such as prepositions and adjectives, as well as various verb tenses. The test also notes behaviors such as dominating the conversation, interrupting the examiner and using idiosyncratic words or phrases.

The researchers plan to test the measure in children with autism, 2 to 12 years old. They also plan to gather a larger, more representative sample of typically developing children. Their goal is to build a baseline of standard scores against which the scores of children with autism or other communication disorders can be compared.