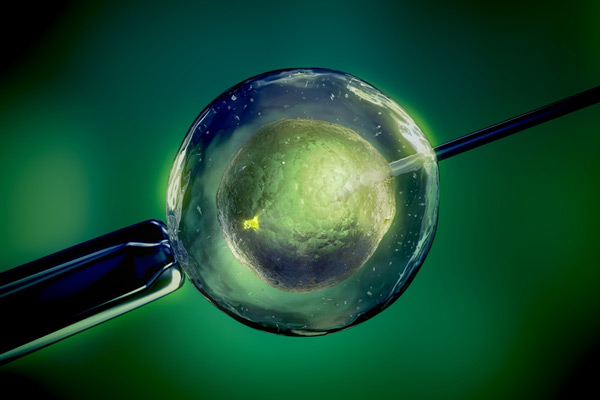 Fresh start: Stem cells created through nuclear transfer — a technique that replaces the nucleus of an egg cell with a nucleus from an adult cell — carry fewer reprogramming errors.

Working with stem cells offers tantalizing opportunities to study the genetic basis of complex diseases such as autism. Stem cells that are pluripotent, meaning that they can develop into any cell type, can come from several different sources.

NT ES and iPS cells both retain the unique genetic signature of the adult cell donor, so they can be used to study diseases such as autism and to test therapies. iPS cells also skirt the ethical challenges of using embryos.

Some earlier research indicated that iPS cells sometimes carry large deletions or duplications of DNA called copy number variations. It was unclear whether those variations are introduced during the reprogramming process or represent an incomplete reversion to an undeveloped cell.

The new study directly compared NT ES cells and iPS cells with embryonic cells with the same genetic background, produced through in vitro fertilization. The three cell types all carry small numbers of copy number variants. However, when the researchers examined chemical tags on the DNA — epigenetic marks — they found that iPS cells retain tags harking back to their previous state.

These altered epigenetic patterns also affect how the marked genes are transcribed into RNA. The differences indicate that iPS cells are incompletely reprogrammed, the researchers suggest, whereas the chemical environment of the egg, even in vitro, reprograms NT ES cells more faithfully. Further work with NT ES cells may reveal what kind of chemical cues the egg relies on and whether scientists could use them to create better iPS cells.