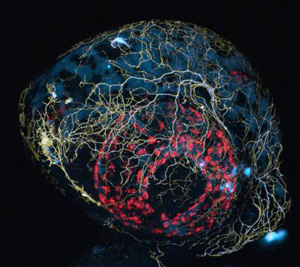 Rainbow heads: Researchers have engineered zebrafish larvae to have fluorescent neurons (yellow) and mitochondria (blue). The red indicates natural fluorescence emitted by other proteins in the cell.

Mitochondria produce the molecules that power the cell and are present at high concentrations where energy is needed. In neurons, this means that mitochondria often travel along projections as long as entire limbs.

Mutations that inhibit this transport may underlie neurological deficits, including Alzheimer’s disease and, possibly, autism. For example, lowering levels of DISC1, which is linked to both schizophrenia and autism, stalls mitochondrial movement. And studies have linked other mitochondria defects to autism.

Zebrafish are popular models because they have transparent larvae and are easy to manipulate genetically. In the new study, researchers engineered zebrafish so that the walls of neurons in their larvae glow yellow and mitochondria fluoresce blue.

Specifically, the researchers labeled proteins in a type of zebrafish cell called Rohon Beard neurons, which relay sensory signals, such as heat and touch, from skin. Mitochondrial transport in these neurons is similar to that in mammalian neurons, the study found.

The researchers used time-lapse imaging to measure the speed and direction of mitochondrial transport and to note when this movement stalls. By labeling a subset of neurons in the cell, they were able to locate the same mitochondria at a later date.

They used the system to look at the effects of a mutation in a protein called TAU, which has been linked to Alzheimer’s disease and dementia. Neurons with mutant TAU have fewer mitochondria than controls do, the study found.

When moving, mitochondria in the TAU mutants move faster than in control neurons, but they pause more often. As a result, they’re slower overall than in controls.

Mutant neurons that express excess MARK2 — which regulates the association between TAU and microtubules, the cellular machinery along which they travel — show normal mitochondrial transport.

The results suggest that the mitochondria in TAU mutants may fall off microtubules. The system can similarly be used to explore other aspects of mitochondrial dynamics, the researchers say.