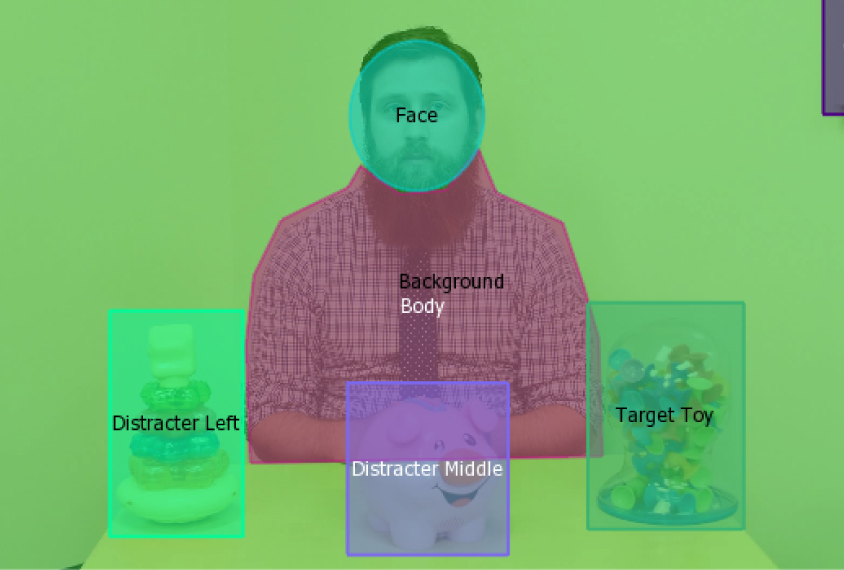 Watchful gaze: Researchers track a person’s eyes as they land on ‘regions of interest,’ such as a face or objects in the environment.

Two novel algorithms that analyze where a child looks as she views a video could help clinicians spot autism. They might also provide clues to the severity of the child’s autism features, according to a new study1.

Some scientists have suggested that eye tracking could speed autism diagnosis and make it more objective. People on the spectrum tend to focus on different parts of an object or scene than their typical peers do2. In the new study, researchers parlay this disparity in gaze into a diagnostic tool.

The researchers used eye-tracking data from 201 children aged 1 to 17 years to create algorithms that predict autism risk and severity. All of the children had been flagged as being at risk for autism and referred to a clinic for standard diagnostic testing; 91 of them received an autism diagnosis based on standard clinical tests.

In a room next to the clinic, researchers monitored the children’s gaze as the children watched a five-minute video. The video shows social scenes or a mixture of social and nonsocial stimuli. In one clip, a person tells her officemate to be quiet; in another, abstract shapes share the screen with a person engaging in an ordinary activity, such as kicking a ball.

Shared interest: An eye tracker monitors whether a child looks at an object when someone else points to it.

The researchers tested the algorithms using the eye-tracking data from the remaining 51 children. They found that the autism risk index ranks children with autism higher than those without the condition 86 percent of the time.

The severity algorithm shows a moderate correlation with overall ADOS score. It also tracks strongly with ADOS scores on some autism features, such as repetitive behaviors and difficulty with social interactions. The results were published in September in the Journal of the American Academy of Child and Adolescent Psychiatry.

If the eye-tracking test is validated in a larger study, it might be a useful screening or diagnostic tool, the researchers say. It might also offer an objective measure of autistic people’s responses to treatments.