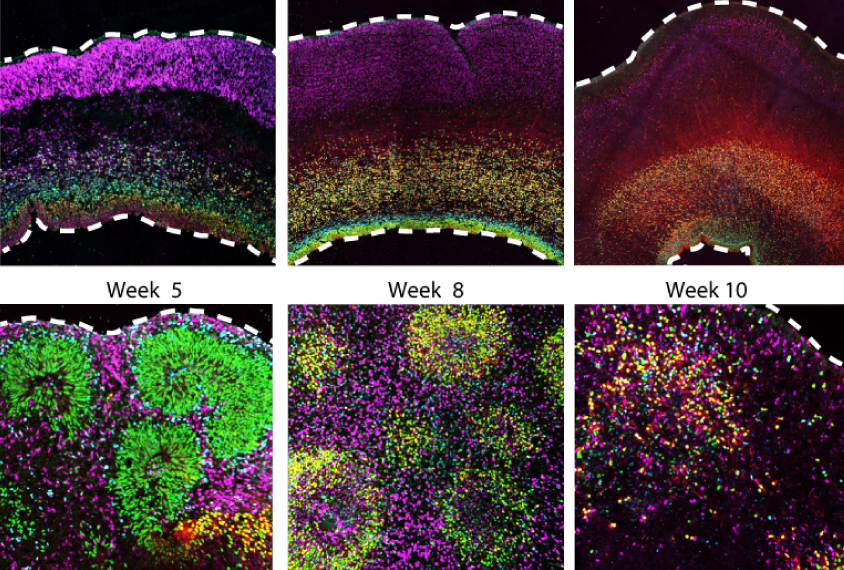 Stunted growth: The cell types in brain organoids (bottom) do not resemble those seen in embryonic brain tissue (top).

Some cells in brain organoids — 3D clusters of cultured brain cells — fail to develop fully, according to a new study1. Growing the brain cells in culture puts them under metabolic stress, altering how they fold and transport proteins, break down sugars and differentiate into mature cell types.

Scientists frequently culture brain organoids from stem cells that have the potential to develop into any kind of cell. Their hope is that the organoids resemble the developing brain closely enough for them to study conditions such as autism.

The new findings suggest, however, that organoids may not be as reliable a model of brain development as previously thought.

The researchers cultured 37 organoids using standard methods. They collected samples from the organoids six times during a 24-week period, noting changes in structure and gene expression as the cells matured. They also compared the gene expression with that of cells collected from the cortex of 6- to 22-week-old embryos.

The team also observed an uptick in the activity of three specific genes in all stages of neuronal maturation in the organoids but not in the embryonic cells. These ‘stress’ genes are involved in folding and transporting proteins and in breaking down sugars. They also observed a slight increase in activity in two of the genes after growing cortical slices in a dish for a week, suggesting that the stress is specific to culturing cells. They reported the results 29 January in Nature.

To verify these observations, the team took embryonic progenitor cells — an intermediate cell type between stem cells and more mature brain cells — and transplanted them into organoids. Within 2.5 weeks the embryonic cells showed increased expression in the same stress-related genes. And they, too, have fewer cell types in culture.

The team also did the reverse experiment: They transplanted 8-week-old organoids into the brains of 4-day-old mice; after five weeks, activity in the stress genes had diminished or even ceased.

Together, the results suggest decreasing stress levels in organoids by modifying the growth conditions could make them more reliable, the researchers say.