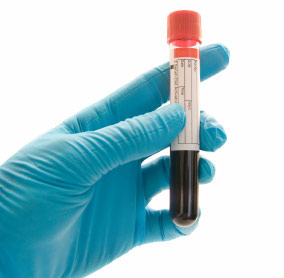 Blood ties: The levels of 34 molecules in the blood can distinguish most individuals with schizophrenia from controls and from people with Asperger syndrome.

A biological signature in the blood could be used to aid the early diagnosis of schizophrenia, according to a study published 12 April in Molecular Psychiatry1. The results suggest that various circulating immune molecules and metabolites reflect the biological changes that underlie neurological disorders.

Disorders such as schizophrenia and autism are primarily diagnosed based on a behavioral evaluation. However, researchers are seeking to find quantifiable biomarkers — biological rather than behavioral indicators of a disorder — that can help identify individuals before the onset of symptoms, or to distinguish between similar, co-occurring disorders.

The new study made use of a technology called a HumanMAP multiplexed immunoassay that can detect the levels of 181 proteins and small molecules in the blood. Studies have used this approach to identify biomarkers for conditions such as coronary artery disease and autoimmune disorders, but not neurological disease.

The researchers analyzed blood samples from a total of 250 individuals with recent-onset schizophrenia — which they divided into five groups to match with controls — and 35 people with major depressive disorder, 32 people with bipolar disorder, 45 people with Asperger syndrome and 280 controls.

In one group of 71 individuals with schizophrenia, they identified 34 molecules that are present at significantly different levels than in controls. For example, these participants have about two times the levels of epidermal growth factor and follicle-stimulating hormone compared with controls.

The biomarkers are also able to distinguish the majority of four other groups of individuals with schizophrenia from controls matched by age, gender, substance abuse patterns and lifestyle factors. The pattern of these markers does not differ between individuals with bipolar disorder or Asperger syndrome compared with controls, but it does distinguish about half of the participants with major depressive disorder.

When directly compared, the biomarkers are able to distinguish most individuals with schizophrenia from those with Asperger syndrome, bipolar disorder or depressive disorder, however.