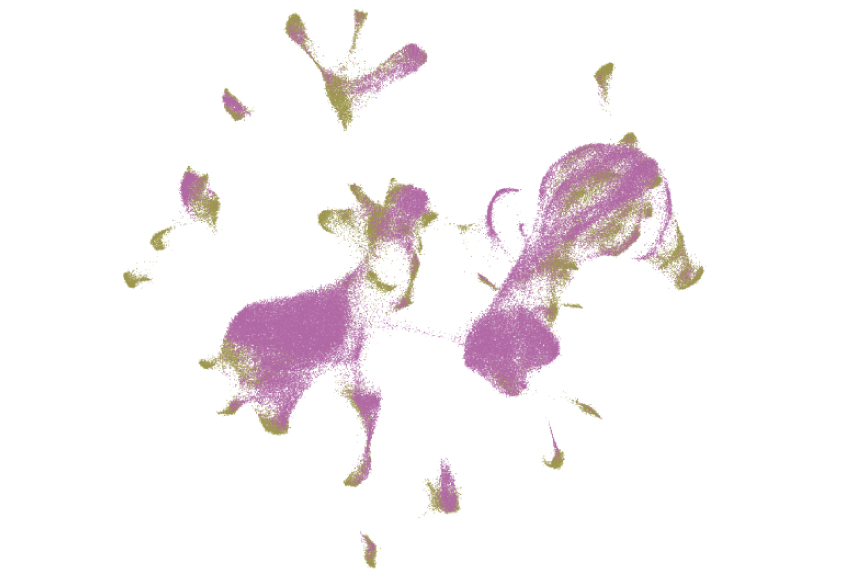 Species similarities: Many fetal human cells (brown) align with cell lineages that start in mouse embryos (pink), based on their gene expression patterns.

Two new atlases that profile millions of cells across 15 organs offer an unparalleled look at gene activity during fetal development.

The first atlas details gene expression, and the second catalogs regions of the genome that are likely involved in regulation. The resources could help researchers better understand how different cell types emerge during development and, in turn, the molecular underpinnings of conditions such as autism. Researchers can explore both atlases online.

Previous methods to examine gene expression or regulation split single cells into individual droplets, limiting the analysis to several thousands of cells at a time. For this reason, most single-cell atlases of fetal development focus on only one organ.

For the new atlases, researchers developed an approach that uses three rounds of DNA barcoding to tag individual cells and profile millions in a sample — enough to encompass multiple organs.

In this method, researchers first isolate cell nuclei from different tissue samples. They place the nuclei from each tissue into a different well on a plate and add a unique DNA barcode to each well. They then pool all the cells, randomly redistribute them into wells, and add another barcode to each well. They repeat the process of pooling, redistributing and barcoding a third time. Because it’s unlikely that any two cells end up in the same series of three wells, each cell gets tagged with a unique combination of barcodes.

The team used this technique to tag DNA copies (cDNA) of messenger RNA, the intermediary between genes and proteins, from individual nuclei and sequenced the cDNA to gauge gene expression. The nuclei came from 28 fetuses, ranging from 72 to 129 days after conception.

The researchers then grouped the cells into types and subtypes based on their gene expression patterns and identified them using known marker genes and mouse-cell atlases.

The new atlas, described in November in Science, details gene expression in about 4 million cells. It includes 77 types and 657 subtypes of cells, some of which represent different development stages in a cell lineage. For example, the atlas reveals cells differentiating from neural progenitors into mature neurons in the brain.

For each cell type, the team also cataloged 11 genes, on average, with levels of expression at least five times higher than in other cell types. Many of these marker genes had not been previously linked to specific cell types and could be used to identify cell types in future studies, the researchers say.

Cell types and subtypes also matched strongly to those outlined in single-cell atlases of mice. In one analysis, the team combined data from the fetal atlas and an atlas of gene expression in mouse embryos. They then clustered cells according to the similarity of their gene expression patterns.

Many human cells appeared to be derived from cell lineages that started in the mouse embryo, providing a window into differentiation throughout early development, the researchers say. 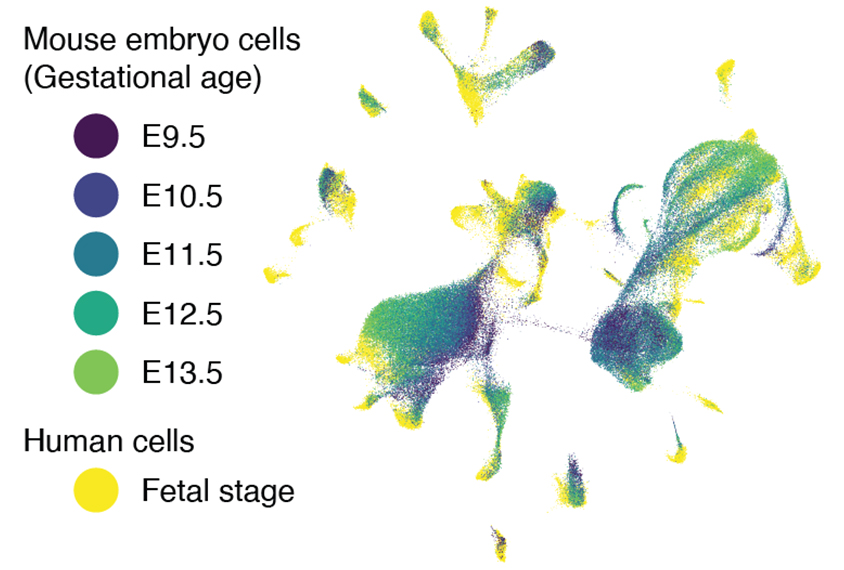 In the other study, published in the same issue of Science, researchers used tissue samples from the same 15 fetal organs to catalog regions of chromatin, the coiled complex of DNA and protein, that are accessible to enzymes. These regions are thought to be involved in gene expression.

After extracting nuclei, the team used enzymes to tag and separate accessible regions for sequencing. As with the gene expression atlas, they used the triple barcoding approach to label DNA from individual nuclei.

In addition, the researchers combed through open chromatin to find the binding sites of transcription factors, proteins involved in regulating gene expression, that are enriched in distinct cell types. This revealed known and previously unknown regulators that likely play a role in generating or maintaining different cell types.

Searching open chromatin for variants linked to 34 traits or conditions, such as high cholesterol and asthma, also revealed the cell types in which these variants are most often accessible, suggesting these cells contribute to the trait or condition. As expected, these cell types or tissues are also often affected by that trait, the researchers report.

The gene expression and chromatin accessibility atlases could help researchers spot cell types that are likely involved in autism, the researchers say, and could shed light on how mutations affect cells throughout the body during development.