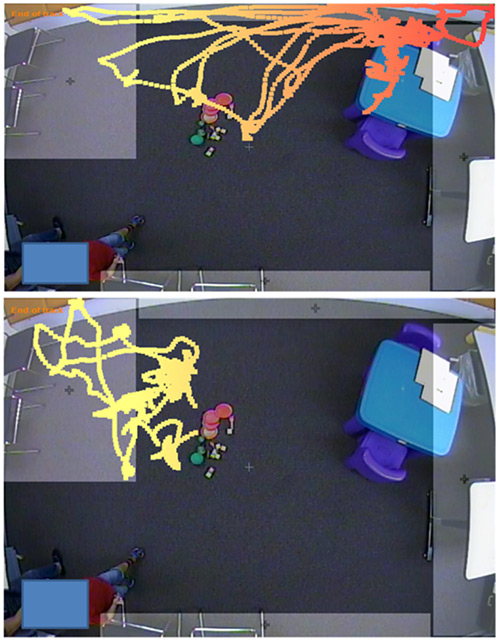 Child explorer: A 2-year-old boy with autism moves across the entire room (top), whereas a boy with language delay sticks close to his parent (bottom).

An automated system developed for tracking the movements of lab animals can be used to accurately map the activity of children with autism, researchers reported in the February Molecular Autism1. When given free rein, the system found, children with autism tend to explore a room’s edges, whereas those with other developmental disorders cling to their parents.

The researchers first saw hints of this pattern during detailed clinical observations of children referred for an autism diagnosis. To confirm it, they installed a tracking system called Noldus EthoVision in the room. The setup includes a camera on the ceiling and software that can track the movement of a particular object — in this case, a piece of red tape placed on the child’s shirt.

The researchers followed the movement of 36 referred children, of whom 27 turned out to have autism. Four of the remaining nine children have attention deficit hyperactivity disorder, three have an anxiety disorder, one has a language disorder and one has developmental delay.

The researchers left the room for three minutes prior to the assessment, and also for three minutes immediately after it, and told the parents that their children were free to explore while they were gone. The room contained several toys along one wall, together with a one-way mirror. The researchers used the software to track the children’s activity during this time.

The children who have severe social deficits, repetitive behaviors and overall autism symptoms spent the most time at the periphery of the room, rather than near their parents. The children who struggle the most with social communication skills also took the longest time to move toward their parents after the researchers left the room. This type of exploration pattern may be an indicator of autism severity, the researchers say.