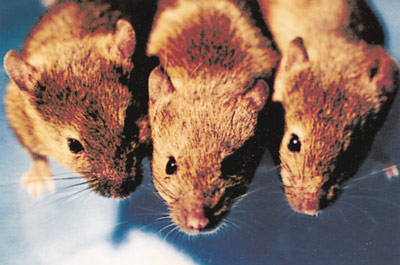 Solitary creatures: Mice missing the disheveled-1 gene don’t groom each other, cooperate to build a nest or curl up with others when sleeping.

Social difficulties and early overgrowth of the brain are trademarks of autism, yet a direct connection between the two has been elusive. One group of researchers may have found a link between the two symptoms and a way to treat both at once, they reported Sunday at the 2013 Society for Neuroscience annual meeting in San Diego.

The researchers looked at a gene called disheveled-1 (DVL1), which encodes a key player in the Wnt signaling pathway, a cascade of events in brain development that is implicated in autism and schizophrenia.

Mice missing both copies of the DVL1 gene do not groom other mice, pitch in to build a nest, or curl up with others to sleep as control mice do1, says Haim Belinson, a postdoctoral fellow in Anthony Wynshaw-Boris’ lab at the University of San Francisco who presented the work.

When exploring their environment, the mice lacking DVL1 show just as much interest in sniffing another mouse as they do in sniffing an inanimate object — a behavior seen in many mouse models of autism, and reminiscent of the social deficits seen in people with the disorder.

Unlike some mouse models of autism, however, the DVL1 mutant mice don’t have seizures or other physical problems, and their cognitive faculties are intact.

Because of this, Belinson says, he saw the DVL1 mouse as the perfect vehicle to trace the loss of social behavior back to its biological source.

When the researchers looked more closely at the mice, however, they discovered that the mice have larger brains than controls do, another common autism feature.

The researchers searched through embryonic development for changes in the brain and found the moment in time when the mouse’s brain begins to balloon. They then discovered the protein pathway responsible for this overgrowth, and intervened to halt the process.

“If you correct what’s wrong in the molecular pathway we found during development, in the critical period when the neurons are forming,” Belinson says, “that will cause a long-lasting effect all the way to adulthood.”

He and his colleagues found that the brain overgrowth begins in the mouse cortex. They followed the trail to the cells actively expressing genes at the time and from those deciphered the molecular pathway that governs them.

Their search led them to a malfunctioning protein called beta-catenin, which governs gene expression and adhesion between cells.

The team then injected pregnant mice carrying embryos missing the DVL1 gene with a compound that activates beta-catenin between embryonic days 9 and 14, the critical window in brain growth. The compound seems to correct the problem: The mice were born with standard-sized brains.

The next step is to see whether this correction also improves the mice’s social behavior. The researchers have those results but declined to reveal them because they are being submitted for publication.

“We knew we corrected the entire molecular pathway, we knew it had corrected all of the features that we had found, but we didn’t know if it was going to affect the adult function of the brain four months later,” Belinson says. “Something happened; I can’t say what.”