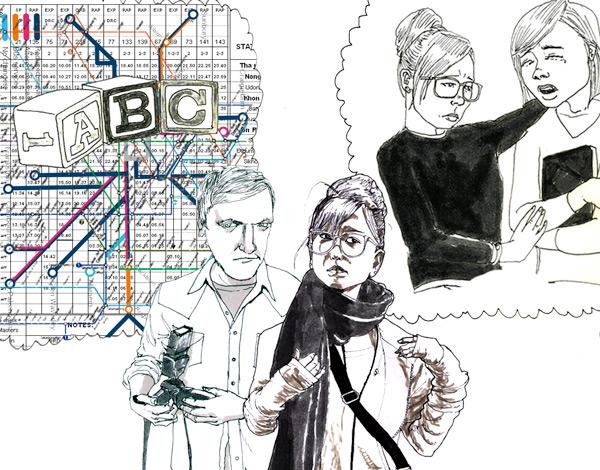 Gender games: According to the extreme male brain theory, men are more interested in systems and patterns, and women are more keenly attuned to others’ emotional states.

The controversial theory that characterizes autism as the result of an ‘extreme male brain’ gets fresh support from a large new survey, published 16 July in PLoS One1. But critics question basic assumptions of the theory and the methods used in the new study.

Simon Baron-Cohen, director of the Autism Research Center in Cambridge, U.K., proposed the extreme male brain hypothesis more than a decade ago as an explanation for why four times as many boys as girls are diagnosed with autism2.

The theory holds that men are better ‘systemizers’ — more interested in patterns and quicker to spot them in natural, mathematical or mechanical systems. And women are better ‘empathizers,’ more keenly tuned to the emotional state of others.

Men and women with autism are both keen systemizers, but less able empathizers, Baron-Cohen has proposed. He suggests that autism is related to overexposure to testosterone while in the womb.

His group has previously made this case based on online questionnaires given to small groups of high-functioning adults with autism. The new study includes the largest sample to date — 4,700 adults, including 811 men and women with autism. In the autism group, both men and women scored higher on the systemizing survey, and lower on empathizing, than did their counterparts in the control group.

“It’s suggesting that males and females with autism are shifting along this dimension which you could call a masculinized direction,” Baron-Cohen says. He argues that the new results have the statistical power to validate the basic tenets of his theory.

Other researchers, however, are not convinced.

“The idea that people with autism lack empathy is wrong,” says David Skuse, chair of behavioral and brain sciences at University College London. People with autism can feel others’ pain, but they are slower to process this emotion, he says. “[The study] does not explain anything.”

The new study included adults between 18 and 75 years of age. The participants with autism are all high-functioning, and the control group excludes people with any condition that can alter perception of reality, such as bipolar disorder, epilepsy or schizophrenia.

The participants each took three surveys online. The Systemizing Quotient-Revised asks responders whether they are drawn to tables and charts when they read the newspaper and whether they enjoy mathematics and spotting trends in groups of numbers, among other questions. The researchers use these answers as a measure of ‘systemizing’ tendency, an affinity for picking out details and patterns in everyday life.

The Empathizing Quotient includes questions about a person’s social interactions, asking whether they share their feelings with others, or can tell when a friend is uncomfortable or unhappy, for example.

The participants also took a third survey, the Autism Spectrum Quotient, which Baron-Cohen developed to measure features of autism in the general population. The results of this survey are used to indicate what Baron-Cohen calls ‘autistic tendency.’

The differences are small, however. “I find the interpretation of such small differences as support for some sort of male brain not particularly convincing,” Skuse says.

The survey uses self-reported accounts of behavior, which are notoriously unreliable because researchers can’t verify the answers, Skuse adds.

Catherine Lord, director of the Center for Autism and the Developing Brain at New York-Presbyterian Hospital, is similarly unconvinced about the new findings. “It’s a bigger sample but there’s not much new here,” she says. “It doesn’t prove that there are differences in anything except on the scales [Baron-Cohen] has created.”

She calls for an independent touchstone to verify the assumptions driving the extreme male brain theory: for example, a definition from another expert, behavioral observations or physiological responses to certain stimuli.

Lord says she would also like to see more information about the survey respondents themselves. “If you’re trying to reach conclusions about the nature of human beings, you need to know where they came from,” she says. She is concerned that people who are predisposed to less social behavior may choose to avoid such a survey altogether — in which case Baron-Cohen’s sample would not be representative of the larger population.

Baron-Cohen acknowledges that Internet questionnaires have limitations, but says the tradeoff is worth it. “The great advantage is statistical power,” he says. “Even if some are overestimating [their abilities] and some people are underestimating, the noise in the data is likely to be canceled out by the sheer size.”

Other critics take issue with the participant pool, however. Of the 811 participants with autism, 454 are women. This is in striking contrast to the usual gender bias in autism, and so may not represent the bulk of people with autism, says Thomas Frazier, director of the Center for Autism at the Cleveland Clinic.

It’s possible that these effects are driven less by innate biological differences and more by cues from their parents and siblings about what it means to be a man or woman, Frazier says. People with autism may ignore those cues more than the control group, for example, but the researchers do not account for this social conditioning. “The theory still leaves me saying, ‘So what?’” he says.

Frazier and the others say they do value the survey as a rare look at high-functioning individuals with autism, particularly women, who are an under-researched and underdiagnosed group3.

The researchers collected a variety of demographic information, such as employment status, as part of the surveys. “The implication that if you have a diagnosis of autism, this is going to blight your life forever, this has caused huge alarm to parents,” Skuse says. But, he notes, the 13 percent unemployment rate in the study’s autism group is encouragingly low.