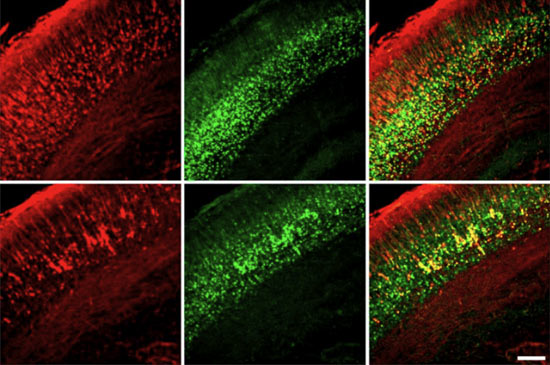 The molecular defects that cause some cases of autism may arise during the development of neuronal stem cells, according to a new theory bolstered by several independent animal and human studies.

The hypothesis originated in a study published last July in which scientists deleted a specific transcription factor — a protein that controls how other genes are expressed — from mouse neuronal stem cells1. Adult mice missing that factor, called myocyte enhancer factor 2 (MEF2), develop smaller neurons and fewer synapses, the junctions between neurons, compared with healthy controls.

What’s more, the mutant mice exhibit unusual levels of anxiety in standard tests, and compulsively clasp their paws — behaviors similar to those seen in a mouse model of Rett syndrome. Rett syndrome is a rare genetic disorder that is often accompanied by autism-like symptoms.

A few of the mice show more severe brain defects, such as abnormal migration of neurons into the neocortex, the outer layer of the brain.

“The behaviors are really striking. As soon as I saw the mouse, I said, ‘I’ve seen this in patients of mine’,” recalls lead investigator Stuart Lipton, director of the Del E. Webb Neuroscience, Aging and Stem Cell Research Center at the Burnham Institute for Medical Research in California.

The study is the first to link an autism phenotype to a disruption in stem cells. Most autism researchers instead say that autism originates much later in brain development.

“If you completely remove MEF2, you don’t really get autism. You get something worse than autism: a developmental disorder where the brain is very severely abnormal in its structure,” says Christopher Walsh, chief of genetics at Children’s Hospital Boston. It’s more likely that autism genes are affected by MEF2 during the formation of synapses, Walsh says.

But a disruption in synapse formation could be the long-term effect of a developmental defect, Lipton counters.

“We found something even more fundamental,” Lipton says. “The defect in synapses may just be part of a larger defect that could be at the level of stem cells rather than later on.” He detailed this argument in a January letter to Science2.

The MEF2 family of transcription factors controls gene expression in the nervous system. Last June, Lipton’s group reported that adding MEF2 to mouse embryonic stem cells spurs them to develop into neurons3. Around the same time, MEF2 made an appearance in two studies of genes associated with autism spectrum disorders.

In May 2008, Huda Zoghbi’s team at Baylor College of Medicine showed that in the mouse brain, MeCP2 — the protein disrupted in Rett syndrome — represses expression of the MEF2 gene4.

“We don’t know if [those genes] cause autism because they’re MEF2 targets, but it is a suspicious association,” Walsh says.

So far at least, researchers have found no other evidence linking autism to MEF2 in stem cells.

If Lipton were right, says Thomas Südhof, professor of molecular and cellular physiology at the Stanford University School of Medicine, some people with autism would have mutations in MEF2 genes — but no one has yet found them.

“The whole genetics that we have about autism up to now, there’s so many different, diverse genes and none of them are early developmental genes,” Südhof says. “It’s one of the most striking findings [in the field].”

Lipton’s theory would also predict that people with autism have problems in other tissues affected by MEF2, such as the heart. That hasn’t been found to be the case, either.

“I think a minor dysfunction of MEF2 could be a contributing factor in many of the autism cases,” Südhof says. “But at this point, the hypothesis that autism is an early stem cell disease is very weakly supported.”

MEF2 is an ‘activity-dependent’ transcription factor, meaning that the genetic program it activates depends on signals it receives from outside the cell. In brain tissue, MEF2 is activated when neurons fire.

Last December, Michael Greenberg identified 182 MEF2 target genes in the rat brain that are involved in synapse function6. Four of the genes — including PCDH10 and DIA1 — have been associated with autism spectrum disorders.

Greenberg, chair of neurobiology at Harvard Medical School, found these target genes in tissue from the hippocampus, the brain’s center for learning and memory. During learning, the hippocampus prunes rarely used neuronal connections while strengthening those that are frequently used.

In 2006, Greenberg discovered MEF2’s role in this process: increased neuronal firing spurs MEF2 to turn on a set of genes that decreases the number of synapses7.

Given those results, deleting MEF2 should lead to an increase in the number of synapses. Indeed, when researchers from the University of Texas Southwestern Medical Center deleted the MEF2 gene from the mouse brain during synapse formation, about three weeks after the animals were born, the mice developed neurons with many more synapses than are present in healthy controls8.

But MEF2 seems to act differently at different points of development. When Lipton deleted MEF2 from neural stem cells, it led to a decrease in synapses, not an increase.

“It could be that there’s some optimal number of synapses that you need, and if you for some reason differ from that, then you might have an autism spectrum disorder. But that’s just a hypothesis,” says Lipton. “There’s a lot more basic work to do.”

“Personally, I don’t think MEF2 is the only answer,” Walsh says. “But I think a general theme might be a disruption between neuronal activity and modification of synapses.”