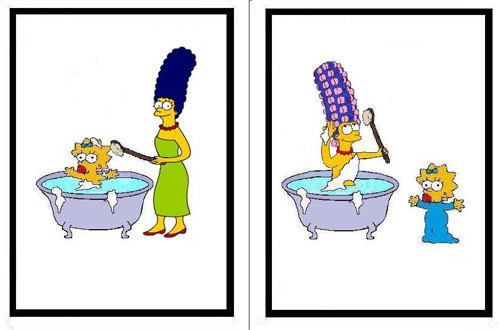 Play on words: Children with autism have trouble understanding sentences with reflexive pronouns, such as, ‘Maggie’s mom is washing herself.’

Children with autism don’t follow certain grammatical rules, according to one of the few studies of the disorder from the field of linguistics.

Autism’s bafflingly diverse array of language deficits — from word repetition to unusual syllable stresses to speaking in a monotone or sing-songy voice or not at all — has always been a hot topic of research. But the vast majority of studies in the past 30 years have focused on semantics, or the meaning of words, and pragmatics, the way that intentions, implications, history and other subtle social contexts affect meaning.

In contrast, the new study, published online 21 March in Applied Psycholinguistics1, is one of a handful to look at autism and syntax, or the rules that govern how sentences are structured. The researchers found that children with autism don’t understand reflexive pronouns such as ‘himself’ and ‘herself.’

“What we’re arguing here is that autistic kids have some real grammatical deficits, not just communication deficits,” says lead investigator Ken Wexler, professor of brain and cognitive science at the Massachusetts Institute of Technology.

This distinction is important, he adds, because many computational linguists, including Wexler himself, believe that grammatical abilities are controlled by specific, innate structures in the brain, whereas semantic and pragmatic skills are more complicated and learned over time. Sorting out which deficits are common in autism could shed light on the brain systems derailed in the disorder.

Several outside experts question Wexler’s interpretation, arguing that the data could be equally explained by problems in semantics or pragmatics.

“This study is definitely breaking new ground, ” says Napoleon Katsos, lecturer in linguistics at the University of Cambridge in the U.K., who was not involved in the new work. “But there is more than one interpretation of what’s happening.”

The first studies on grammar and autism, published in the early 1980s, suggested that syntax isn’t a particularly big problem for children with the disorder. This work found that children with autism learn grammar in the same way that typical children do, but at a slower rate, in line with their overall developmental delay.

Since then, a couple of studies have suggested the linguistic picture is much more nuanced. For example, one study showed that children with autism don’t use correct verb tenses2. Another found that they produce less complex sentences than do typical children or those with developmental delays3.

For example, in the sentence, ‘Cinderella’s sister points to herself,’ the reader must know that the pronoun ‘herself’ refers to Cinderella’s sister, not Cinderella. “We linguists believe that a normal person implicitly computes this stuff in their heads, without thinking about it,” Wexler says.

In contrast, in order to understand a personal pronoun, the reader usually must put the sentence into a wider context. In the sentence, ‘Cinderella’s sister points to her,’ the pronoun ‘her’ is somewhat ambiguous. Depending on the context, ‘her’ could be Cinderella or another woman mentioned in a previous sentence or paragraph.

The study included 14 children with autism between ages 6 and 17 and two groups of typically developing controls who were individually matched on tests of nonverbal intelligence and overall language ability, respectively.

The researchers read aloud a short caption and asked the children to choose which of two cartoons it matched on a computer screen. The pictures showed characters from The Simpsons television series. For example, the caption ‘Maggie’s mom is washing herself’ refers to a picture of mom in the tub, whereas ‘Maggie’s mom is washing her’ goes with a cartoon of Maggie in the tub.

When tested on reflexive pronouns, children with autism pointed to the correct cartoon 43 percent of the time, compared with 92 percent and 83 percent of the two control groups, the study found. For sentences using personal pronouns, in contrast, the autism group was 67 percent accurate, compared with 71 percent for both control groups, a difference that is not statistically significant.

On the face of it, the autism group’s poor performance on reflexive pronouns is striking, notes Dorothy Bishop, professor of developmental neuropsychology at the University of Oxford in the U.K. “It looks like they happened upon something that children with autism are particularly bad at.”

Bishop points out, however, that children are often influenced by particular aspects of pictures, such as a color or pattern. The study did not perform a statistical calculation that compares the responses to each picture separately, which would have accounted for this effect. “You want to know that it wasn’t just one or two rogue items in there that all the autistic kids took a particular way,” Bishop says.

It’s also not clear whether a few particularly impaired children were skewing the autism group, notes Rhea Paul, professor of speech-language pathology at Sacred Heart University in Fairfield, Connecticut. “The study didn’t ask if the kids who had low language levels were the ones making all of the mistakes, they just looked at the average for the whole group,” she says.

“We know that children with autism have problems with the concept of self and the concept of the other,“ Katsos says. “So what if the actual problem with understanding reflexives is not in the syntax of the language, but something that goes deeper than that?”

Everybody agrees that using complex linguistic measures is a promising new approach for subdividing the notoriously diverse autism spectrum. This could help, for example, in finding new candidate genes or in tailoring treatment approaches, Katsos says. “I hope that this work functions as a catalyst so more people will start looking into this.”

Wexler is now collaborating with neuroscientists to perform brain scans of children with autism and related disorders while they complete various linguistic tasks. This work could help sort out which circuits in the brain are behind the diverse language problems in autism.